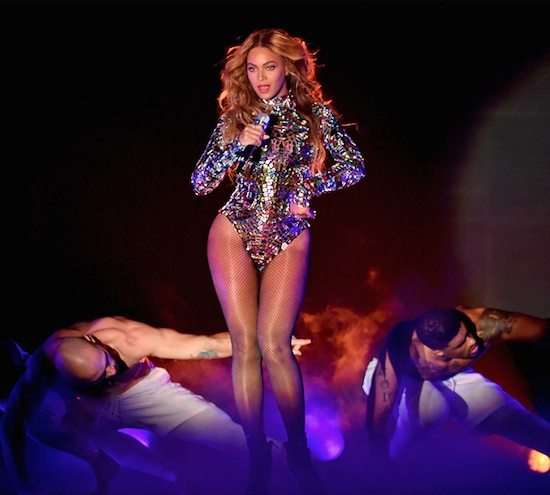 It was a guarantee that everyone's lips would be flapping about Beyoncé's performance at this year's 2014 MTV Video Music Awards. But when word got out that King B would be performing the entirety of her self-titled album in a 15-minute span, her performance went from must-see to can't miss. Ever the consummate performer, she amazed with a performance of the album from "Pretty Hurts" to "Blue," though not exactly in that order.

Wearing what's best described as a bedazzled leotard and fishnets, she kicked of with a brief visit of "Mine" before inviting the audience into her world. What came next was nothing less than a show-stopping event. She ran through every track, some in small snippets with others getting a full verse and chorus. And of course, this being Beyoncé, the stage was packed with dancers galore, some dressed in suits, some scantily clad, some wearing nothing but glitter, g-strings and smiles. Speaking of smiles, the entire time Bey was on stage, hubby Jay Z, adorable daughter Blue Ivy and pregnant bestie Kelly Rowland watched on and beamed.

Once her whirlwind of a set was over, Jay took the stage to present her with the Michael Jackson Video Vanguard Award with Blue in tow. She thanked fans, friends and family and planted a big smooch on her hubby's lips (divorce rumors be damned). And like that, she left the stage and the show went lights out, because we all know that once Bey leaves the stage, the show might as well end anyway.