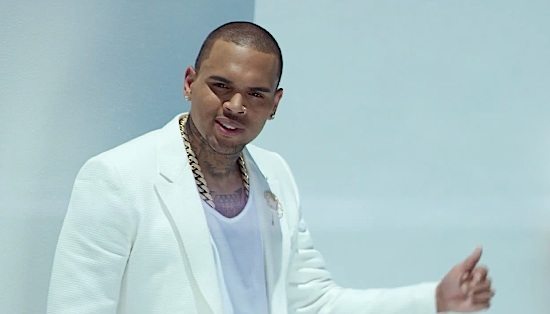 Chris Brown, Usher and Rick Ross deliver the visuals to Brown's latest single "New Flame." The video begins with heavy Beats by Dre product placement and a bevy of video models dressed in white bathing suits. While they luxuriate by or in a pool of blue water, Brown joins them decked out in all white as well. Breezy alternates between standing on the water's edge and popping, locking, twirling and spinning (with a random umbrella-ella-ella-ay no less) on a circular platform all the while singing about his "New Flame."

Next on the scene is Usher who is also surrounded by the bathing beauties and is joined by a mysterious woman clad in a fierce flowing red gown. Mixed in are also scenes of Usher and Chris singing and dancing in front of a large burning X -- to signify how hot Brown's album of the same name is perhaps? -- in the dessert. Brown is also joined by some male dancers and they execute some unique, energetic choreography with flames occasionally shooting from their feet.

There is no fancy footwork from Rick Ross, however, who rounds out (pun intended) the trio with his bars and grunts while sitting on a white throne in all of his mammary-flashing glory. (Of all the people to go shirtless in this video, it'd have to be him. Fix it, Jesus!) Tyga makes an inexplicable guest appearance at the fellas' white party and the video ends without a big finish or anything really exciting happening. There's some low key symbolism to be found in this clip, and the video definitely steps the song's game up, but lacking an overall concept, we're kinda cool on "New Flame."