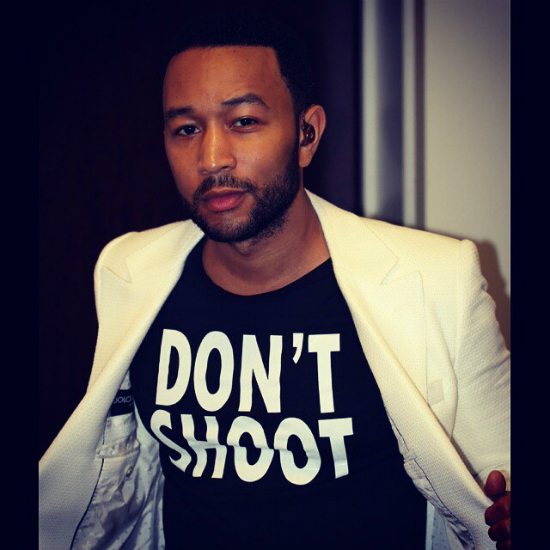 The concert had been planned for months, but Wednesday night's John Legend tribute to Marvin Gaye's classic album, What's Going On, at the Hollywood Bowl couldn't have happened at a more important and needed time in light of the death of Michael Brown, civil unrest in Ferguson, MO and a renewed conversation about race in the United States. The Los Angeles area amphitheater was the setting for a night of music billed as "Marvin Gaye's What's Going On with John Legend" and featuring Sharon Jones and the Dap-Kings and the Los Angeles Philharmonic joining the GRAMMY Award-winning crooner. Thanks to Yahoo! Live and Live Nation, those unable to be in attendance at the show could enjoy it via a live stream from the comfort of their homes, offices, cars or on the go on Yahoo! Screen.

Underneath a starry night sky, the concert opened up with The Dap-Kings and the LA Philharmonic backing master of ceremonies, spoken word artist Marc Bamuthi Joseph, to the tune of "I Heard It Through the Grapevine" before John Legend strode on stage decked out in an all white suit. He eased into the Marvin Gaye hit like a pro and impressed with his vocals to kick proceedings off before bringing out Sharon Jones. Together they turned the song into a rousing duet, which was a harbinger of things to come for the rest of the first act.

Legend and Jones launched into a set of Marvin Gaye and Tammi Terrell favorites, including "Ain't No Mountain High Enough" and "Your Precious Love," which were thoroughly entertaining. John and Sharon had amazing chemistry and their strong voices blended together beautifully on this classic material. Jones, who last year was diagnosed with bile duct cancer, showed that she's beat the disease and has bounced back better than ever. At one point, Legend said of his duet partner, "Sharon Jones, is she not incredible?" to raucous applause. This opening set was nostalgic, bright and downright fun.

After a brief intermission, John Legend returned to the stage for the second half of the show sans Jones, but he brought the fire on his own with his wardrobe change. Legend arrived in another white suit, but underneath his jacket he wore a black t-shirt with the words "Don't Shoot" in bold white letters emblazoned on the front. He said so much without saying a word with this bold fashion statement before sitting at a grand piano to let the music of Marvin Gaye's What's Going On continue to speak.

Legend's treatment of Gaye's 1971 album stayed true to form, with stellar accompaniment from The Dap-Kings, the Philharmonic and four of the most incredible background vocalists. Performing the entire album from top to bottom, including the interludes, Legend continued to wow those watching live at the Hollywood Bowl and live online with his deft handling of the material. He took great care to retain the spirit of the original recording and bring it alive for a new generation.

Adding to the impact of this second act were a handful of California-based female spoken word artists whose social commentary in their poems added a contemporary and powerful touch. One of the most breathtaking spoken word segments came from a trio of teenage girls who aggressively spit a poem damning today's youth culture that ended on the line, "The greatest lessons are the ones you don't remember learning."

If there is one thing that we learned during John Legend's live tribute to Marvin Gaye and his seminal What's Going On album is that the messages contained therein are as significant and relevant in 2014 as they were in 1971. The timing of this momentous musical event was divine given the wounded state of the world. But as Marc Bamuthi Joseph stated during his final poem, "Let the healing begin."

In the event that you were not at the Hollywood Bowl or watching the Yahoo! Live stream, you can watch the concert in its entirety on Yahoo! Screen right now. The concert and complete setlist are also available for viewing on the next page.