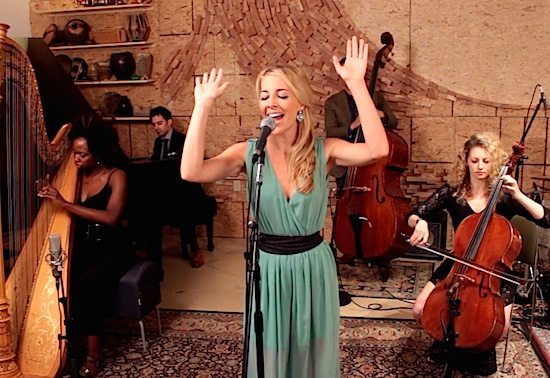 With the James Brown biopic, Get On Up, out in theaters in the states, the self-proclaimed rewriters of pop music as we know it, Postmodern Jukebox, got together with the Bounce-Worthy  Morgan James to rework one of Brown's classics, "It's A Man's, Man's, Man's World." Scott Bradlee and his band are now notorious thanks to their big band take on Beyoncé's "Drunk In Love," and we here at SoulBounce HQ also have them to thank for handing us a late pass on discovering the divine vocals of Ms. James.

On this reworking of "It's A Man's, Man's, Man's World," Postmodern Jukebox and James take the listener through a sonic voyage. The song begins sparse but far from simple with a harp, cello, grand piano and James' commanding voice bringing the song to life. The delicate tone of the first minute is the stomped out of existence as the bass and drums kick in and take the song into a jazz-fueled, orchestral, funk odyssey. James' vocals sway from fierce and strong to gentle and dulcet throughout the course of the song adding to the sublime musical foundation laid by Postmodern Jukebox to deliver a captivating tribute to the Godfather of Funk.