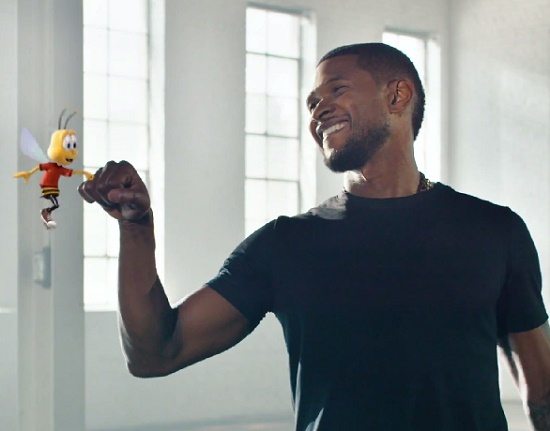 Apparently signing endorsement deals with Honey Nut Cheerios is what's hot is these hip hop/R&B streets. First, Nelly helped the Honey Nut Cheerios bee get some swag in a series of commercials for the cereal. Now it's R&B's own Usher's turn to hawk some honey nut goodness to the public.

In a commercial titled "Body Language," Ursh is seen perfecting his dance moves to his latest single, "She Came To Give It To You," when the bee comes in to communicate with him through the language of dance. The two then have a dance off to the song (thankfully, it's the edited version), with their movements telling the audience the benefits of starting their day with the whole grain oat cereal. Cute.

While it's kinda corny, it's leaps and bounds beyond the lame Nelly spots and far less embarrassing for Usher. And, as an added bonus, Ursh gets to promote his current material and not a reworked version of a hit from 2002 (no shade, though, as I'm sure the St. Lunatic was swagging all the way to the bank to deposit that Honey Nut Cheerios check).

Wanna watch Ursh cut a rug with an animated bee? Of course you do! Grab a bowl of Honey Nut Cheerios and check out the commercial right here.