Alicia Keys Announces ‘We Are Here’ With New Single & Video 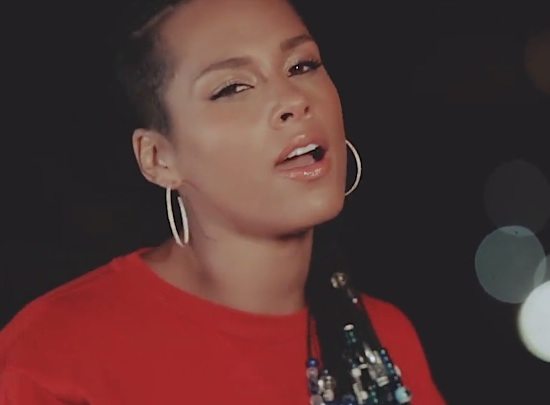 Alicia Keys is making a return to music after thrilling the world with her last set, Girl On Fire, and, it seems, that the ills of the world are weighing heavy on the GRAMMY winner's mind. Her newest song, "We Are Here," finds the singer speaking out about injustice, from Ferguson to the Gaza Strip, Chi-Town to Iraq and everywhere in between. The song is obviously an honest, heartfelt effort from the singer, with a rousing piano arrangement and a marching drum line that calls listeners to action. However, lyrically the song is a bit all over the pace. While it's nice to hear an artist talk about more than your typical love song or material excess, Ms. Keys name checks a bit of everything but goes the generic route. Yes, crime, violence, war, racism, lack of education and broken homes in communities are all serious issues, but where is the emotional resonance and depth?

For the song's video, A. Keys keeps it simple, as it's just her and her piano on a New York City rooftop. Rocking a red sweatshirt with the word "Revolution" emblazoned across the front and her once-signature cornrows, she belts out the song for all her worth. While less than impressed with her lyrics (Marvin Gaye she is not), Alicia does manage to show much more emotion and investment in her performance. But since we know that Alicia can write a great song with political leanings (see Girl On Fire's "Not Even the King") and her eloquent Facebook post that accompanies this, we're a bit disappointed that she doesn't bring that same grace and emotion on the actual song.