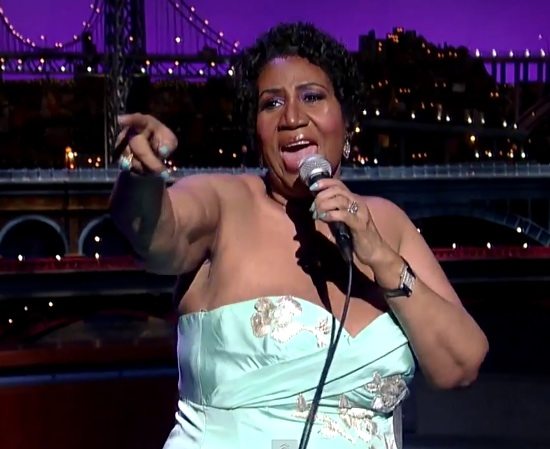 Yesterday, soul music legend Aretha Franklin debuted her cover of Adele's "Rolling in the Deep," the first single from her upcoming album, Aretha Franklin Sings the Great Diva Classics. She also took to the stage last night on Late Show with David Letterman so that we know it's real. Of course she performed the track, which she spices up with a bit of "Ain't No Mountain High Enough" for good measure, and gave it her unique Aretha spin. However, you'd be forgiven if your were a bit distracted while watching.

First of all, despite being in her early 70s, Aretha insists on wearing dresses that reveal her shoulders and arms, making her look like like she was literally poured into her clothes (and not in a good way). Secondly, gospel legend (and Whitney's mother) Cissy Houston reprised her role as one of Aretha's backup singers. However, Cissy didn't exactly seem happy to be there. In fact, while most of the singers and band were smiling and moving to the rhythm, Cissy constantly looked like she gave negative f--ks about the proceedings going on around her.

Besides those two things, it was a fairly decent — but not great — performance. Aretha even sat down for an interview with Letterman after, telling a story about how she wasn't allowed to grace the Ed Sullivan Show stage because of a low-cut dress (imagine that) back in the '60s. To see her performance and interview, just check out the videos below.