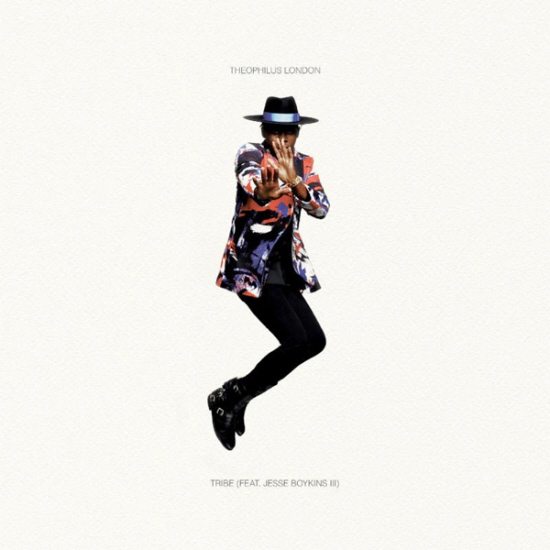 Always eclectic and always electric, Theophilus London's latest single "Tribe" is the Brooklynite rapper at his boisterous best. He brings his BFF and frequent collaborator Jesse Boykins III along for the water slide ride into a thicket of drum clatters and pulsating '80s synths, this assemblage of courtesy of French beat wizard Brodinski. As usual, Theophilus London proves he's one of the sharpest MC's around. Even though he's just tossing out reefer references and name-dropping the likes of Rihanna while still on a heady high from his time in "Rio," he still slices and dices with his razor-sharp vocal precision, and you can't help but get turnt up over it punctuating the hypnotic swirl of beats. Not only does London keep his tunes sharp, but his style is also always on-point, and it's little wonder why London was able to snag fashion design's iconic grumpy cat Karl Lagerfeld to create the single's simple, but effective, cover art after the two struck up a friendship three years ago.

"Tribe" is the first layer peeled from London's upcoming VIBES! set, his follow-up to his well-received 2011 debut, Timez Are Weird These Days, and already things are kicking off with a dope bang. Get your download on at iTunes and join the "Tribe."