Jennifer Hudson Brings Her ‘World’ To The ‘Steve Harvey Show’ 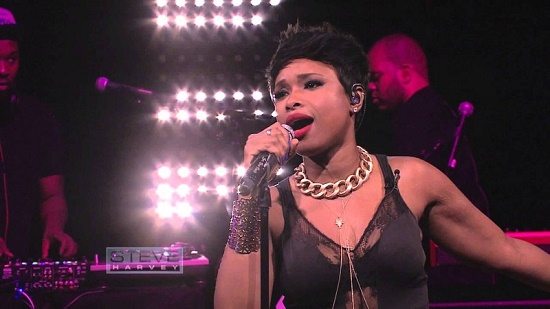 Jennifer Hudson is currently on the media junket to promote the release of her new album, JHUD, and her most recent appearance was on the Steve Harvey Show. Taking over the entire hour, she graced Steve Harvey's daytime stage to perform my favorite jam, "It's Your World." Every time I see her perform the disco-heavy track, I immediately get to dancing and try (but usually fail) to hit her explosive notes. Of course, JHud brought her A-game and slayed effortlessly.

Backed by a full band and her background vocalists (including fellow American Idol alum George Huff), Jennifer gave a top-notch and sultry performance that brought the audience to their feet. Throughout the performance, the camera would pan to Steve Harvey getting his life to hilarious effect. You could tell that he wanted to jump on stage and jam with Jenny. In fact, after the taping of the show he did just that. In a hilarious web exclusive, Steve, Jennifer and her band had an impromptu jam session with a bit of comedy sprinkled in for fun.

Watch both clips right here for some good music and good fun.