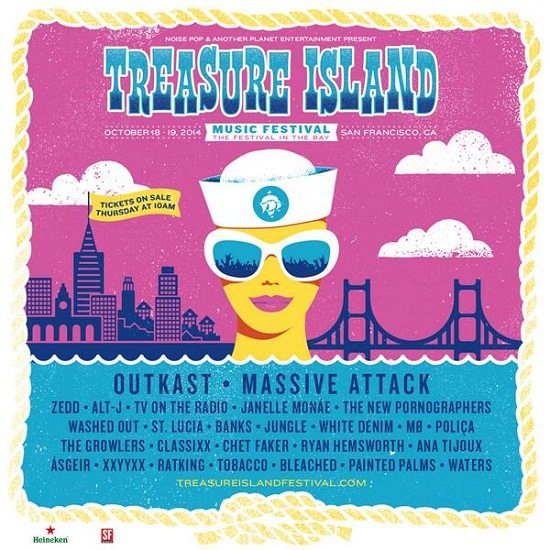 Just when you thought the summer’s festival season had met its end, San Francisco warms things up with the Treasure Island Music Festival. The Bay Area’s unique, "come-as you-are or however you feel" spirit combines with 25 of music’s most dynamic talents for this two-day event, October 18th and 19th. Since 2007, the small island by the Frisco Bay has been overrun by music enthusiasts for the festival's eclectic lineup, ranging from Little Dragon and James Blake to Public Enemy and Toro y Moi.

For the 2014 installment, they’ve decided to go big or go home with OutKast, Massive Attack and Janelle Monáe among the headliners. If that wasn’t a strong enough showing already, French-Chilean MC Ana Tijoux and rock outfit TV On the Radio will also be part of this year’s festival, bringing that alternative vibe to the traditional music festival lineup.

Treasure Island Music Festival’s signature, the spectacular 60-foot Century Ferris Wheel, will be surrounded by its ever-changing eclectic mix of interactive art installations and roaming performers for the finest in people watching.

Ranking among the nation’s top annual festivals, the Treasure Island Music Festival has no overlapping sets and features gorgeous, panoramic views of the San Francisco Bay serving as the festival’s backdrop. It’s the perfect remedy for those of you needing a concentrated fix of alternative soul, hip hop and rock.  To get your tickets, go to the festival's website.