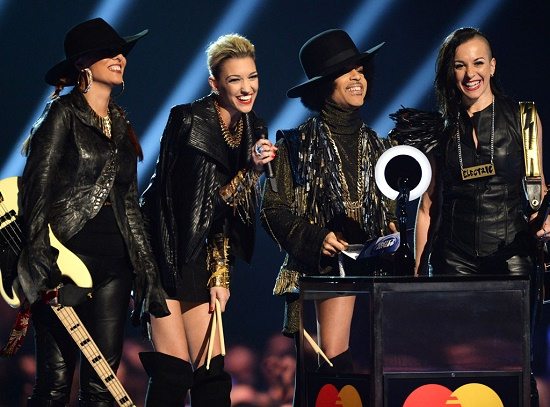 Prince thrilled us when he announced that he and band 3RDEYEGIRL would be releasing two new albums, Art Official Age and PLECTRUMELECTRUM, on September 30th. And with a listen to the Lianne La Havas-featuring "Clouds," his Purpleness got us all the way open. And it don't stop with the release of two new songs from the upcoming projects, "U Know" and "Whitecaps."

"U Know," which will appear on Art Official Age, is a sly, modern spin on Prince's raunchy jams of the '80s. Though not quite slow, it features a lilting piano loop, a vocal sample of Mila J's "uh huhs" and hard-hitting programmed drums as Prince delivers tongue-twisting verses before singing breathily on the chorus, "You know how much I want ya/You know how I care/When you go, you know I'm gonna flaunt ya." While it's far less explicit than he has been, the erotically-charged tone of it all lets you know exactly what this one is about.

"Whitecaps," on the other hand, is a tender ballad reflecting on lost love. Prince isn't featured heavily here vocally, instead giving the ladies of 3EG a chance to shine on their own, while Prince only chimes in on the song's chorus. Prince taking a backseat works here, with the emotion of the song expressed well in the vocal as well as the lilting rock guitar.

Check out both new songs and let us know which of the two new albums you're looking forward to picking up on September 30th (hint: the only answer is both).