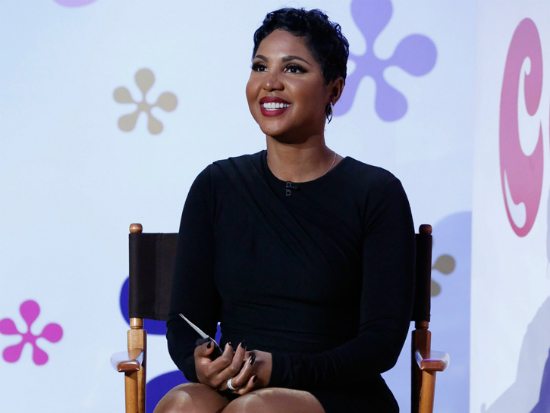 The Queen Latifah Show's second season is off to a fantastic start, and it's only two days old. Yesterday, we were treated to Elle Varner doing her "Dance" on Big Sexy, and on today's episode, Queen Latifah brought back Toni Braxton who appeared on her show back in May. During her previous visit on season one, the subject of dating came up, and Latifah offered to find Toni a date on her dating game segment and the petite singer agreed.

Fast forward to today, and it was time for Braxton to find a boo and get her groove back. Latifah rolled out The Celebrity Dating Game set and three bachelors for Toni to choose from. The segment was sponsored by dating website Zoosk, and, truth be told, the bachelors weren't much to look at and didn't look like Toni's type at all, which added to the comedy of it all. What wasn't a laughing matter, however, was Toni Braxton herself who wore her finest freakum dress and looked incredibly good. She took her place on stage and asked the bachelors questions to gain some insight into their personalities, and the shade was flying between the three of them as they attempted to one up the other. Toni's sister Towanda Braxton was there in the audience for moral support, but the decision was all on Toni. After a few rounds of lighthearted questions, she chose one of the men who made the best impression on her to go out with.

Who knows if this bachelor will turn into Toni's new bae, but we'll see what happens when Latifah brings them both back to discuss their date soon. Watch the entire hilarious segment right here and see who Toni picked.