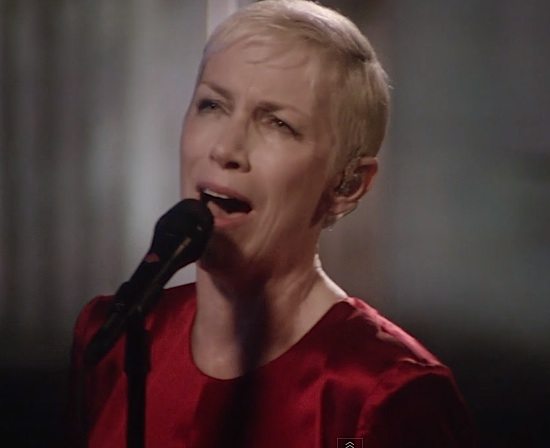 Cover albums are having quite a moment as of recent with the divas of yore as both Aretha Franklin and Bette Midler have released throwback cover collections in the last month, but leave it to Annie Lennox to go in the opposite direction as she reminiscences on jazz's glory days through the aptly titled, Nostalgia. Available today in the United States and arriving October 27th worldwide and featuring works by such luminaries as Duke Ellington and George Gershwin, Nostalgia has Lennox unleashing that peerless voice on a number of familiars, and like Franklin and Midler, Lennox is celebrating these classic standards through the gaze of the women who sang them. As she told NPR she spent little time listening to the originals and decided to go for a more "intuitive" approach, placing herself in the core of the material, and the success of that approach has already showed up impressively as her renditions of  "I Put A Spell On You" and "Summertime" will provoke a shiver up the spine.

Lennox also tackles not one but two Billie Holiday classics, "God Bless The Child" and "Strange Fruit." Yes, if you've heard one Billie Holiday cover, you've heard them all, but Lennox's version of "Strange Fruit" recaptures every tear shed in the searing dialogue about the lynchings of African-Americans in the 20th century with fiery ferocity that it's hard to find it slight. Back in 1943, Holiday expressed the images of "blood on the leaves" and "Black bodies swingin' in the Southern breeze" so vividly, and Lennox brings those same images to recall in 2014, and in light of recent events in Ferguson, Missouri, her forcible tone does bode a reminder at how the past isn't so out of reach as we think it is. While Lennox could sing the nutrition facts on a Stouffer's mac and cheese dinner and have me riveted, her haunting take of "Strange Fruit" has my interest piqued for the other stories that she retells on Nostalgia.