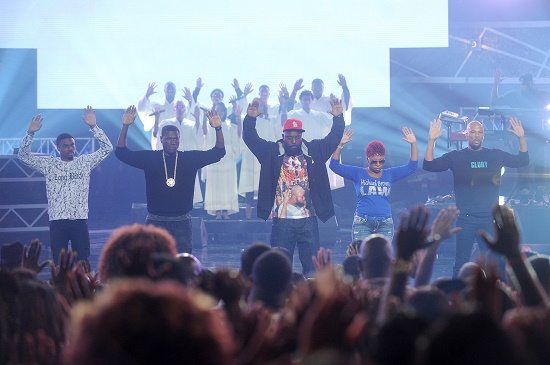 While there were a few moments during last night's BET Hip Hop Awards 2014 broadcast that weren't saturated in foolishness, it was mostly awash in silly — and at times straight up ig'nant — moments. Leave to Chi-Town representer Common to bring a much needed solemn note to the circus with his performance of the remix of Nobody's Smiling track, "Kingdom."

Backed by a choir dressed in all white, Com and his partners in rhyme Vince Staples and Jay Electronica kept it gritty and really real as they spit about the problems plaguing not only Com's native Chicago but every 'hood and city in America. Then, to really bring it all home, Common brought out Lesley McFadden and Louis Head, the parents of slain Missouri teen Michael Brown, for a moment of silence as everyone on stage and in the audience put their hands up in protest. It was a beautiful — and without a doubt the most powerful — moment of the night.

In addition to this performance, Common also announced yesterday that he and Jay Electronica would embark on the Nobody's Smiling North American tour to further spread their message and promote quality hip hop throughout the land. You can check out the moving performance of "Kingdom" below and get tour dates and venues for the Nobody's Smiling Tour (tickets for which can be purchased here).