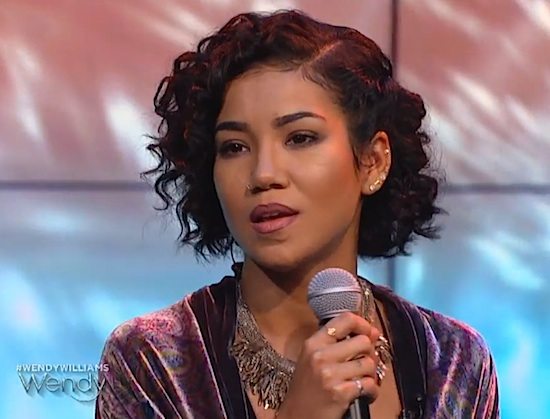 The prime time avenues for R&B and soul artists to get on national television are few and far between, but thank goodness there are numerous daytime TV shows to pick up the slack. The Wendy Williams Show is one of a handful talk shows that consistently shows love to urban artists, and today she welcomed Jhené Aiko to her set to entertain viewers. Wendy Williams introduced Aiko who was accompanied by only a guitarist for a sweet and simple acoustic performance of her hit song "The Pressure."

Jhené commanded everyone's attention as she sat perched on a stool clad in a luxurious long robe. With near perfect hair and makeup, the singer was as cute as ever, but it was her voice that was center stage on full display and she clocked in an awesome live vocal.

The appearance was a good look for Aiko who also joined Wendy to announce some of the nominees for this year's Soul Train Awards, which the talk show queen will also be hosting in Las Vegas on November 7th to later air on BET on November 30th. Jhené's great day continued with the news that she snagged nominations in four categories, Best New Artist, Best R&B/Soul Female Artist and The Ashford and Simpson Songwriter’s Award and Video of the Year for her song and video for "The Worst."

We'll see how Jhené does next month, but until then check out her enthralling Wendy showing right here.