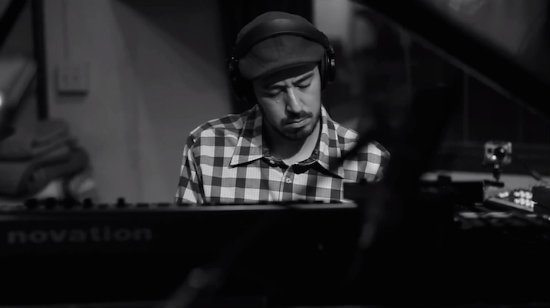 Even if you've never heard of Miguel Atwood-Ferguson, there's a strong chance that you've heard his work. That's because the super-talented multi-intstrumentalist has collaborated with everyone ranging from Bilal to Flying Lotus to Erykah Badu. Now, he gets to serve as the impetus for Mark de Clive-Lowe on his latest song, "Sketch for Miguel." The song and its subsequent video features Atwood-Ferguson on viola, MdCL on piano, Jamire Williams on drums and Ben Shepherd on bass. According to MdCL, the song was written specifically with his longtime collaborator in mind, so it only made sense that Atwood-Ferguson would perform on it.

"Sketch for Miguel" was filmed live in Los Angeles at the Stagg Street Street Studios and is featured on Mark's CHURCH album, released earlier this year. A limited edition 180 gram double vinyl version of the album has just been released and includes a digital download card and full color insert. Only 500 copies are available of the double LP so hop on over to the MdCL's Bandcamp page to get your hands on this special project. In the meantime, peep this jazzy ode to Atwood-Ferguson and watch these musical masters at work in the studio.