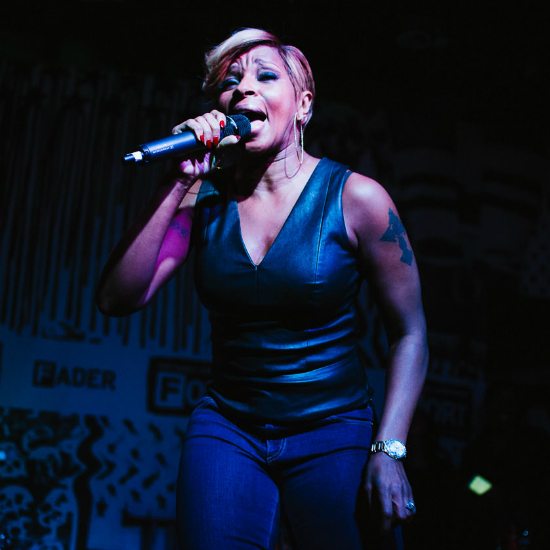 This past weekend Mary J. Blige was the closing act at The FADER FORT Presented by Converse in New York City as CMJ week came to an end. The Queen of Hip Hop Soul was a big surprise to the too cool for school audience, but MJB had a surprise of her own in store with the live premiere of the new song "My Loving" from her upcoming The London Sessions album.

Clad in a black leather vest and blue jeans, Queen Mary told the crowd, "I got something new for y'all," and launched into the intro of "My Loving." Backed by a track, a sparse piano played as Mary sang the opening lyrics with a tinge of struggle. The beat switched up to a jack-your-body soulful house groove (the kind we wish "Right Now" had, but we'll gladly take it here) on the first verse, but Blige's voice continued to exhibit some wear and tear. It wasn't until the chorus that she sounded more like the MVP, but throughout the performance she faltered and couldn't seem to find her happy place.

I love Auntie Mary, Lawd knows I do, but this was not a shining moment for her vocally and the hipster-heavy crowd couldn't have been any less impressed or interested in her performance. When I saw her at the ESSENCE Festival in July she slayed the entire Superdome, so maybe she just needed a bigger stage and a more turned up audience to really get into her groove. Watch Mary performing "My Loving" and an even more struggle-filled live version of "Real Love" below that was rife with glitches, and let's just chalk this up to a very off night for the diva.

Whatever the case, "My Loving" sounds like it will be a bonafide dance floor filler when the studio version is released, and The London Sessions sounds like the must own album of autumn.


TAGS:  mary j. blige
Previous: Teyana Taylor & Chris Brown Say ‘Do Not Disturb’ Their Groove Next: Morning Soul: She Was The Finest Thing I’d Ever Seen