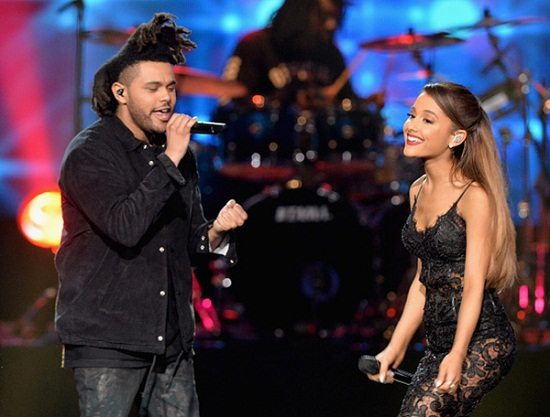 For those of us of a certain age (basically anybody old enough to actually remember the '90s and not have to be told about them via VH1 specials), the American Music Awards stopped being relevant years ago. While last night's showing was no exception, it did occasionally  have its moments, one such being Ms. Ariana Grande's time on the stage.

Big Sean's new boo thang took the stage wearing a sheer, black lace fishtail gown  as she served up high-class-madame-at-a-brothel realness for jazzed-up versions of her sophomore album's biggest singles, "Problem" and "Break Free." Free from their Top 40 stylings, both songs actually impressed and allowed young Ariana to show off a bit of her range. But because this is the AMAs and you have to have big moments, she soon launched into her current single, "Love Me Harder." She kicked off the first verse much to all the screaming teenyboppers' delight and was soon accompanied by dirty Canadian The Weeknd, who was as dressed down — in a black Supreme jacket, jeans and Jordans — as Ariana was dressed up. Despite the clash in wardrobe though, the bright lights and big production went over well enough before the lights on the stage dimmed.

While we definitely would've loved more of the jazzy side of Ariana (maybe she can explore that on a future release), we can't be mad at the solid showing she delivered. Check out what she and The Weeknd did and let us know if you feeling the love.