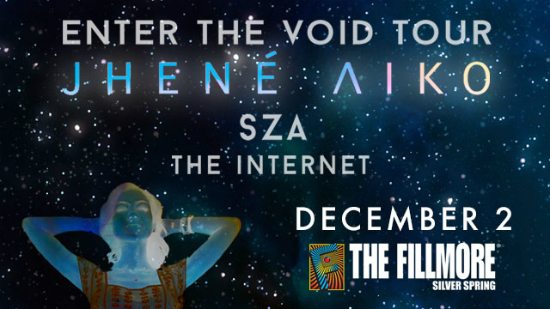 When it was announced that Jhené Aiko, SZA and The Internet were all joining forces to hit the road together on the Enter The Void Tour, alt-R&B fans collectively rejoiced. To gather these three acts together on one bill was a genius move and seeing them do their thing live will surely be the move. The tour will be hitting major cities from coast-to-coast and included on that list is our Nation's Capital, Washington, DC, where the tour will stop on Tuesday, December 2nd. The scene will be set at The Fillmore Silver Spring for Aiko, SZA and The Internet to show and prove to their many fans.

Tickets are on sale now at the venue's box office and also online via Live Nation. Be sure to cop yours with the quickness before they sell out. If you're interested in winning a pair of tickets, then you're encouraged to enter our ticket giveaway on the next page.