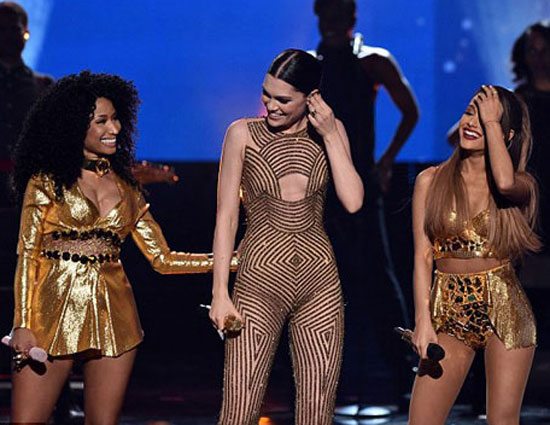 Last night at the 2014 American Music Awards, Jessie J, Ariana Grande and Nicki Minaj brought explosive energy to the evening when they performed their hit single "Bang Bang." The standout of the trio was Jessie, who started off the performance in the audience, grinding on Khloé Kardashian and her bae Luke James and then getting down with Sam Smith, Taylor Swift and Lorde. While we'd be totally fine if we never saw Lorde or Swift dance again, it was still nice to watch them mouth the lyrics and genuinely have fun. Once Ariana joined the mix, the raunch level increased a tad with the songstress dropping it like it was hot and showing off her legs in six-inch heels. Both songstresses held their own with impeccable powerhouse vocals throughout the entire performance.

When Nicki joined the ladies, the crowd went wild, anticipating a theatrical delivery from the animated rapper. What they got instead was a pretty stiff performance from the lyricist, who looked like she was having a little trouble walking in her heels and maybe even on the verge of a potential wardrobe malfunction. But no worries. To close out the high-energy performance, Jessie and Ariana took turns doing their best soulful runs from the Christina Aguilera playbook, ending their time on stage quite literally with a bang. While the smoke cleared, the golden girls received a standing ovation, and we honestly think they deserved it.