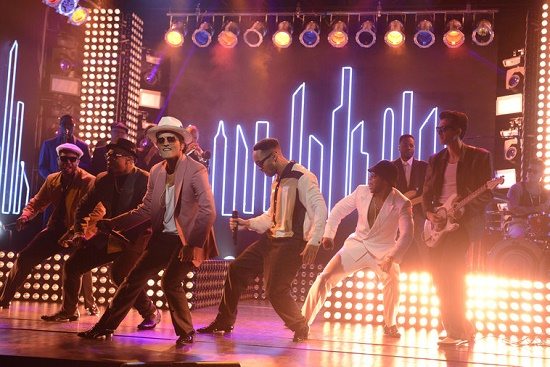 While some may have tuned in to Saturday's Saturday Night Live for the laughs (or lack thereof), they surely got an unexpected dose of funk from this past weekend's edition. That's because Mark Ronson and Bruno Mars, who've been bringing the noise and the funk as of late, were the episode's musical guests. And after schlepping through all that funny, the funk and fun that Mark and Bruno brought was very welcome.

They kicked off the night with a performance of "Uptown Funk" which recreated quite a bit of the song's video, right down to their dance moves and outfits. The crew set the stage on fire, breaking it down like The Time in their heyday. However, they brought even more heat when they took the stage for the second song of the night, "Feel Right." That's because they brought out New Orleans firestarter Mystikal, who lit up the stage with his rapid fire rhymes and even unexpectedly cut a rug with Bruno and the crew.

Do yourself a favor and don't bother watching the whole show. We've got both performances right here for your enjoyment without the burden of unfunny sketches or lame jokes. All you have to do is press play.


TAGS:  bruno mars", mark ronson, mystikal, saturday night live, the time
Previous: Beyoncé Has Ratchet Fun With Friends In The ‘7/11’ Video Next: Sam Smith & A$AP Rocky Bring The ‘I’m Not The Only One’ Remix To Life At The 2014 American Music Awards