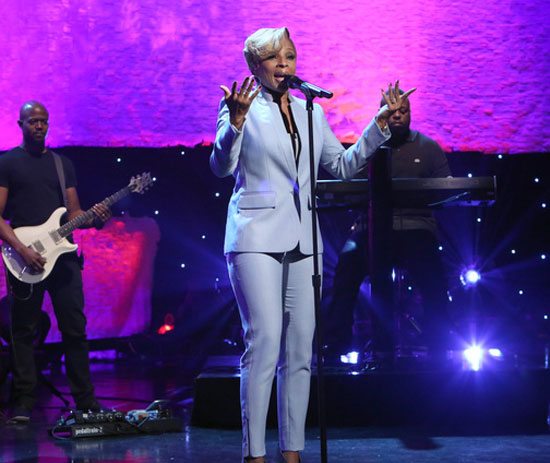 When it comes to promoting an album, we're gonna go ahead and say it — Mary J. Blige is in first place. The songstress has been putting in that work, dropping videos left and right and popping up on our TV screens. She recently stopped by The Ellen Degeneres Show to perform her single "Right Now," from her upcoming album, The London Sessions. Donning a steel gray suit, Mary kept it classy (but still a little hood) and moved the audience with her special brand of passionate soul. The song, written and produced by Disclosure, Sam Smith and Jimmy Napes, was perfect for the show as Mary encouraged the audience to clap with her. We're pretty sure Ellen was out of her seat doing her jig as she later expressed The London Sessions was her new favorite Mary album.

After her performance, Mary sat down with Ellen to talk about the idea of The London Sessions and how it evolved. Mary lived in London for a month, working with top British talent, and now she has a much anticipated album to show for it. While the music speaks for itself, we all know you have to keep your name on everyone's lips in the weeks and months leading up to the release. To keep her reign as #1 promoting machine, you won't see Mary having any seats any time soon. She'll be performing at the American Music Awards on November 23rd, then later on The Tonight Show Starring Jimmy Fallon on December 1st and finally A Very GRAMMY Christmas, which airs on December 5th. Did we mention her album debuts on December 2nd? Before she takes you to London town in a few weeks, have a seat for Mary and watch her performance of "Right Now" and pre-order The London Sessions on iTunes.