Pharrell Is A ‘Hunter’ On The Prowl On ‘The Voice’ 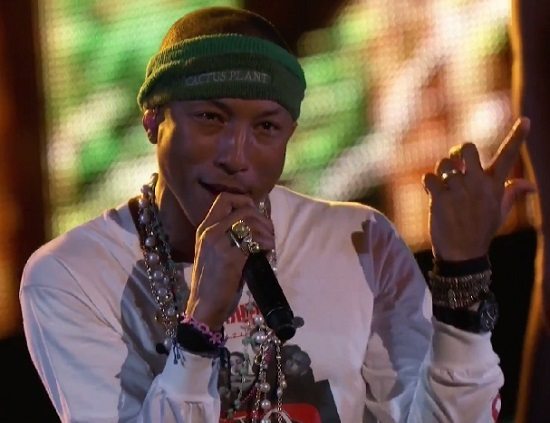 While The Voice is supposed to be all about discovering new talent, we all really know that it's the show's judges that get most of the shine. With Pharrell Williams and Gwen Stefani sitting in the judge's seats this season (both with projects recent and upcoming to promote), it was inevitable that both would take to the stage throughout their stint.

Pharrell hopped to it on last night's episode, trotting out his primal love joint "Hunter" for the audience in studio and at home. Surrounded by a forest of his "baes," as he calls them, while strutting around the stage, Skateboard P brought his best sexy while draped in all kinds of sparkly things from his neck to his wrist (seriously, could he have anymore jewelry on?). The trip around the stage with the dancers eventually culminated with Pharrell walking into a section of the audience full of women wearing shades and white spa robes (ring a bell?).

While this definitely wasn't the most involved or intricate performance that we've seen on The Voice — Usher and CeeLo Green and Christina Aguilera have graced that stage before him, after all — Pharrell's too cool for school demeanor and his contemporary take on the Robert Palmer aesthetic really work for him. Check out P performing "Hunter" and let us know what you think.