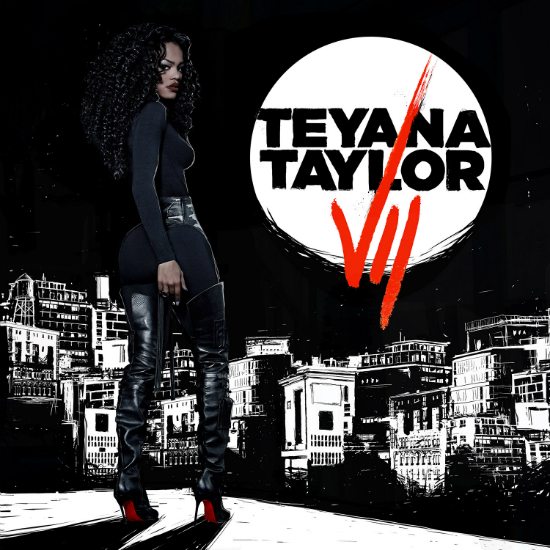 For the seven years that Teyana Taylor has been part of popular culture, she’s been known for everything but music. Her resume includes being a reality star on MTV's My Super Sweet Sixteen, a shoe designer for Adidas, an actor, a dancer, a fighter of strippers and Rihanna’s twitter nemesis. However, while “Google Me,” failed to give us lift off to “A Planet Called Harlem,” the G.O.O.D. Music singer hasn’t given up on getting out her dreams. In fact, with VII, she’s delivered one of the most pleasantly surprising albums of the year. While we were expecting something more akin to the braggadocio vibe of her persona -- an album of hip hop-heavy R&B tunes with imitation DJ Mustard beats -- what we have is a sexy, mature, soulful album, featuring a young woman recounting her experiences in love and loss.

VII starts off with the interlude “Out of my League,” introducing us to a different Teyana, letting her hair down over a laid-back island beat, confidently sharing her insecurities over being worthy of someone’s affections. Maybe she’s also talking to her audience, our love and affection just out of reach for the singer for the past few years, while simultaneously proving that she is very much deserving of our devotion.

Ms. Taylor switches gears, giving us her best sexy Janet Jackson whisper on songs like “Request” and “Do Not Disturb,” featuring Chris Brown. Taylor and Brown have solid chemistry, delivering an almost seamless duet over a growling baseline that will make you think of bedsprings being pressed to their limits. On “Broken Hearted Girl,” Taylor shows us another side of the girl with a chip on her shoulder over love, as the good girl gone bad cries, “I’d rather play my part than play the fool,” bypassing Mr. Right for Mr. Right Now to avoid just another heartbreak, then closing out the song quoting Teena Marie’s, “Portuguese Love.”

We’re eight tracks in before we see the Teyana we were expecting, with “Maybe,” the first official single off the album, with two rap cameos and the requisite use of popular vernacular, “Or nah?” While the song isn’t as mature as the other material on the album, it’s still a welcome mid-tempo addition to the overall project.

Unfortunately, it is also after track number eight that the album starts to lose momentum. “Sorry,” a mature, anti-apology song to a wrongful lover, showcases Taylor’s pipes over sparse production, but fails to connect. And, while “Business” is a standout track, it also feels a bit out of place on this album of baby-making music. Lastly, we have, “In the Air,” where Teyana pops one into the atmosphere before leaving her lover and closing out the album. However, things don’t exactly end with a bang. A song like, “In the Air,” would have been acceptable for the Teyana we thought we were getting. However, after hearing Teyana prove herself throughout an album full of enchanting ballads, it feels a bit disappointing and anti-climatic.

This takes nothing away from Teyana or this solid collection of songs she’s crafted. While a few more upbeat tracks would have been welcome, and the interludes should have been full songs on the LP, not just the deluxe version, we're not complaining. VII is a cohesive album that crisscrosses between old school rhythm and modern sensibilities, breaking our expectations of the burgeoning starlet and the conventions of mainstream R&B. The final result is an amazing R&B album that actually sounds like R&B from the least likely of sources.