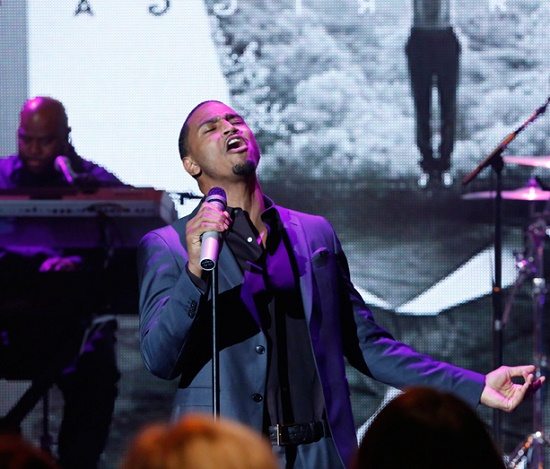 The Queen Latifah Show is one of the best places to find music on TV, and the trend continues with today's episode. Mr. Steal Your Girl himself, Trey Songz, took the stage today to perform his song "What's Best For You" and give Queen Latifah the inside scoop on his upcoming endeavors.

For the performance, the crooner got suited and booted, rocking a dark blue tailored suit and sunglasses to play up his gentleman side as he serenaded the audience with the song, which is from his most recent album, Trigga. The heartfelt song, about sacrificing a relationship so that his lady can have the best, was the perfect choice for Queen's mostly-female audience. However, there was definitely some shakiness going on vocally. But what Trey doesn't always bring in ability, he more than makes up for it in the looks department. As things got a bit rough toward the end, Trey snatched off his shades and flashed his winning smile. Who could be mad at that?

After his performance, Trey sat down with Queen to discuss his upcoming 30th birthday and his Between the Sheets Tour that he'll be embarking on with R&B bad boy Chris Brown. He also gave Queen info about his "30 for 30" campaign he's doing for the month of November with his charity, Angels With Heart, for which he's performing 30 acts of kindness in the lead-up to his big 3-0.

Check out Trey's performance and interview right here and be sure to check your local listings to see what time today's show, which features Oscar winner Octavia Spencer, will air in your area.


TAGS:  chris brown, Octavia Spencer, queen latifah, The Queen Latifah Show, trey songz
Previous: Jessie J Delivers A ‘Masterpiece’ Of A Lyric Video Next: Pharrell Is A ‘Hunter’ On The Prowl On ‘The Voice’