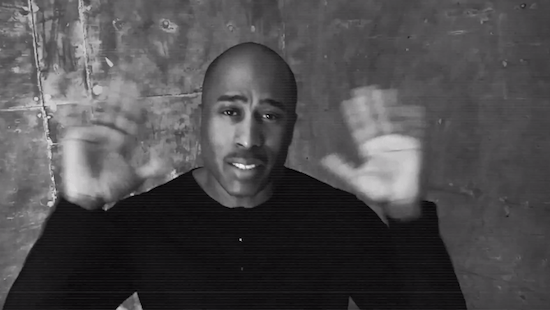 "I can't breathe." That phrase has become the rallying cry for protesters around the world in the wake of the grand jury decisions in both the Michael Brown and Eric Garner police brutality cases. It's been chanted during the peaceful protests that have taken place and worn on t-shirts as a sign of solidarity. Now, the phrase is the inspiration behind Ali Shaheed Muhammad's latest song, "CPR." Recorded in response to the injustice that took place, the former A Tribe Called Quest and Lucy Pearl member delivers this poignant and timely message that is sure to inspire the masses to keep fighting. To help get his message out, he tapped Bounce-Worthy alum Merna (formerly known as Ayah), visual artist/rapper JaPoet and rapper David Luke, who also co-produced the single.

Backed by a brooding track, Muhammad jump starts the song with an emotionally-charged verse, saying "Peace, equality and liberty / my life matters / you won't diminish me." The verse itself is a slight departure for the normally reserved producer who often chooses to let his music do the talking. He explained his decision to record the song on his Instagram page, writing "The Eric Garner non-indictment decision left me in shock. Shock turned into tears. Tears turned into this song. Revive the nation. Time for a collective consciousness." The accompanying visuals for "CPR" are equally as moving. Shot entirely in black and white, images from the recent protests are interspersed with each artist delivering their lines.

While the song is available for free download via his website, Muhammad has also released a new t-shirt line, whose proceeds will go towards the Eric Garner Family Fund. His Equality line features t-shirt and sweatshirts and features the term "≠quålity" emblazoned on the front. The line is also available on his website.


TAGS:  a tribe called quest, ali shaheed muhammad", ayah, David Luke, Eric Garner, JaPoet, lucy pearl", Merna, Mike Brown
Previous: Kendrick Lamar Closes Out ‘The Colbert Report’ With An ‘Untitled’ Jam Next: Is Floetry Back Together? This ‘Floetic’ Performance Has Us Hoping So