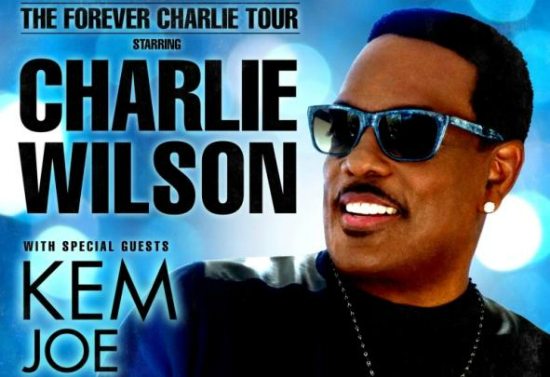 The world has come to know him as Uncle Charlie, but if you've seen Charlie Wilson perform live -- whether on TV or in person -- then you should also know him as one of the greatest entertainers to ever do it. From one awards show to the next to the main stage at the ESSENCE Festival, at 61 years young Charlie Wilson routinely shuts it down and leaves stages in ruins and audiences stunned at how excellent a live performer he still is.

Everyone's favorite uncle will be giving his fans more opportunities to see him do his thing and do it well in concert on his Forever Charlie Tour, which is named after his forthcoming album. Forever Charlie will be released on January 27th and will get people good and ready to see his live show where he'll perform his new material and dig deep catalog of hits from The Gap Band days through today. Not only will music lovers be entertained by Wilson's energetic performance, but they'll be treated to opening sets by R&B crooners Kem and Joe. You can't beat that lineup, but you can make plans to go when these soulsters come to your city.

The Forever Charlie Tour kicks off in February in Cleveland, OH and wraps in March in Oakland, CA and will be hitting arenas and other large venues coast-to-coast, with tour stops scheduled for Baltimore, Atlanta, Chicago, Detroit, New York City and Washington, DC for a total of 27 shows in 26 cities. Tickets for all dates go on pre-sale on December 9th at 10 am for anyone who orders Forever Charlie on pre-sale via his official online store. American Express card members can enjoy a pre-sale between 10 am on December 10th through 10 pm on December 11th. Last but certainly not least, tickets to the general public go on sale on December 12th at 10 am. For more information on all these sales, just visit Charlie's website.

If you've been yearning for Uncle Charlie Wilson to drop the bomb on you, then check the roster of Forever Charlie Tour dates below right now to set 2015 off lovely.

TAGS:  charlie wilson, joe, kem, the gap band"
Previous: Spur Of The Moment & Levi Stephens Are ‘In Too Deep’ Next: Carmen Rodgers Is Anything But ‘Heartless’ On Her New Single