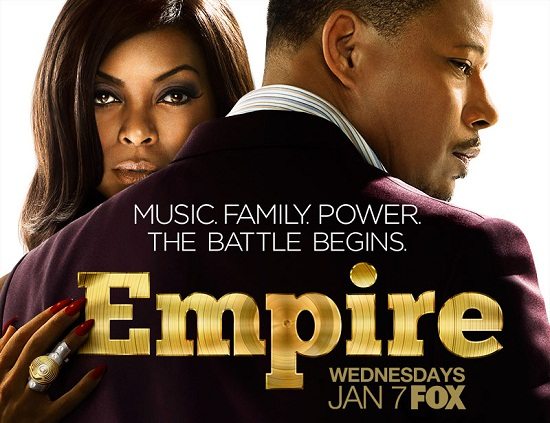 If you're an avid TV watcher, by now you may have seen the dramatic teasers for the highly anticipated new series Empire, directed by Lee Daniels and starring Terrence Howard and Taraji P. Henson. Scheduled to hit the small screens via FOX, Empire is a musical drama about a hip-hop mogul named Lucious Lyon, played by Howard, who must groom one of his three sons to take over Empire Entertainment after learning that his health is in critical condition. However, his plans begin to take a turn once his ex-wife, Cookie, played by Henson, emerges from prison and comes back to demand what she feels is rightfully hers, since she helped Lucious build his empire decades prior. We will see how each member of the Lyon family will fight for the throne of the empire, so to speak.

Since Empire is a show based on the hip-hop industry, music obviously plays an integral part. Mega-producer Timbaland is the mastermind behind all of the original music produced for the show. The series' first original song, "No Apologies" features actor Jussie Smollet and newcomer Bryshere Gray who both play Lyon's two youngest sons on the show. Smollet's character, Jamal, is the sensitive middle son who is a singer/songwriter and sings the hook on "No Apologies." Gray, a young rapper and actor from Philly, plays youngest son Hakeem who aims to be the next big hip-hop artist in the industry. The song sounds like most rap songs on the radio these days, where Jamal and Hakeem brag and boast about their swagger. The music production is very high quality, which is no surprise since Timbaland is the producer. It will be interesting to hear what else he has up his musical sleeve for the rest of the series.

To get a little taste of music from Empire, peep the lyric video of "No Apologies" right here. If you are really feeling it, you can download the track on iTunes as well. As an added bonus, we also have a sneak peek of the behind-the-scenes footage of creating the series' soundtrack. Empire premieres on Fox on January 7th at 9 pm ET.