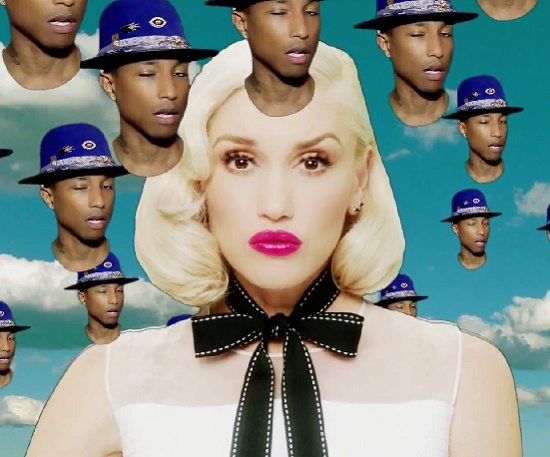 To say that we were excited about Gwen Stefani's solo return around these parts would be an understatement...and then we heard the album's first single "Baby Don't Lie" and our expectations dwindled considerably. But with the new album set to debut later this month, it's about time that we got another single and video, and Gwen delivers with her new Pharrell Williams-assisted joint "Spark The Fire."

Now this is the Gwen that we were looking for! The platinum blonde singer reprises the feistiness that she exhibited on "Hollaback Girl" as she talk/sing/raps her way through three-and-a-half minutes of a hot, club-ready beat laced by Skateboard P. The pair's chemistry is definitely intact, with Gwen feeling at home within the groove. She takes the vibe even further in the emoji-filled video as she performs among a crew of dancers while the song's lyrics flash in text message bubbles.

And she even translated the video's crazy, kaleidoscopic feel to the stage of NBC's The Voice, even down to the cloud emoji that she descended onto the stage with. For that outing, her fellow judge Pharrell joined her on stage in a blue Adidas jumpsuit and holding a sparkler to get the expectant crowd hyped.

Who said that you couldn't make the clubs go off well into your 40s? Get ready to put your lighters up when you check out the both the song's video and performance on The Voice right here.