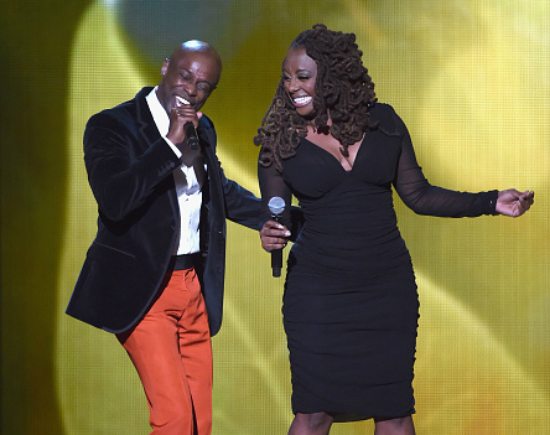 Leave it to Kem to put the soul in the Soul Train Awards 2014. The Detroit crooner brought his A-game to the proceedings with a mellow smooth set that slowed things down after high-energy performances by Chris Brown and Nico & Vinz that opened the show.

Kem left all that dancing and carrying on to the young folks, instead deciding to begin his performance seated at a grand piano to sing his current single "It's You," lifted from his album Promise To Love. The singer/songwriter tickled the ivories for a taste before standing up to reveal a rather unexpected pair of orange dress slacks.

His fashion was on fleek, but so was his voice as he then segued into fan favorite "When Love Calls" for his next selection. Soul Train Awards attendees and a few celebrities, including Bill Bellamy and Mike Tyson, were seen in the audience catching feelings when he sang their jam, but they really got their life when he brought Ledisi out to join him. Together, the two singers brought his 2010 duet with Chrisette Michele, "If It's Love," to life. Ledisi was pitch perfect and impressive as usual to match Kem. Hopefully this isn't the last time that we hear this winning musical combination, but in the event that it is, at least we'll always have this performance.