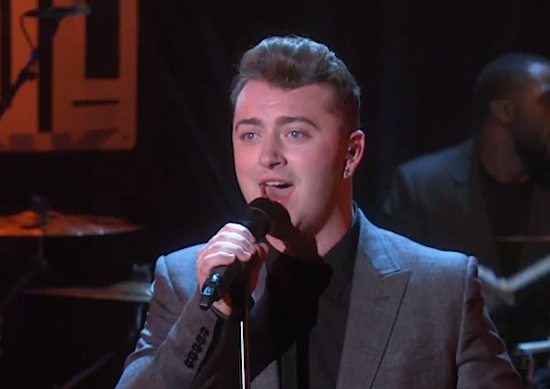 It's always great to see an artist who we've deemed Bounce-Worthy become one of today's biggest stars in the game right now. When we first heard Sam Smith's powerful voice two years ago on "Latch," we knew the world would love his music just as much as us. Fast forward to 2014, and Mr. Smith is everywhere we turn. Last week, the breakout artist won an American Music Award for Best Male artist. Still reveling in that victory, the singer made a stop at The Ellen DeGeneres Show to perform his current single, "I'm Not the Only One."

Once again, the British crooner gave another perfect performance. His vocals were top-notch and sounded exactly like the original recording. Also, the addition of live strings and a small choir of background singers gave the performance a lovely boost. "I'm Not the Only One" is an emotional song that tugs on everyone's heartstrings, earning him the nickname as the "male Adele" but he is truly his own artist.

After his performance, Sam sat down with Ellen DeGeneres for a brief interview where the hostess gushed over his talent. DeGeneres also gave him props for his decision to come out right before his album was released and commended him on his bravery. Always the jokester, Ellen ended their chat by giving Sam a plaque with silver scrub brush to commemorate all the toilets he scrubbed on his old job before his rise to stardom. Won't He do it?!

Watch Sam's performance and interview below, and look out for more goodness to come from the talented Mr. Smith.


TAGS:  adele, ellen degeneres", Sam Smith, The Ellen DeGeneres Show
Previous: The Rebirth Work It Out With ‘Fat Santa’ Next: Bilal Is ‘Slipping Away’ On The Streets Of Paris