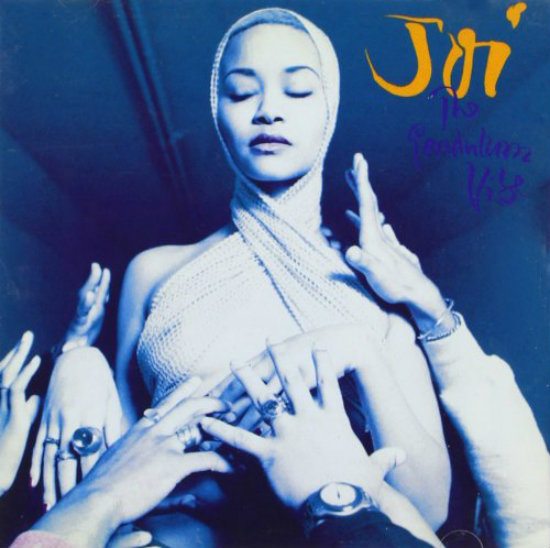 This past spring, Atlanta duo OutKast joined forces as part of a reunion tour in commemoration of the group’s 20th anniversary. However, many failed to realize that each time Big Boi and Andre 3000 took the stage, they were sharing it with another artist who was also celebrating the big 2-0.

Twenty years ago, Joi Gilliam, who provided backing vocals during the tour, made her official introduction to the music world with her debut album, The Pendulum Vibe. While the collection would go on to garner a cult following, at the time of its June 1994 release, it was far from a commercial success. Despite being critically acclaimed, its been largely speculated that the album was initially overlooked by listeners due to it being far ahead of its time. Though the term “neo-soul” has been embraced since it was first introduced to the musical lexicon during the late ‘90s, The Pendulum Vibe is considered to be the first neo-soul album, leading the charge before music from the likes of Maxwell, Erykah Badu, D’Angelo and Jill Scott would come to define the term.

An eclectic fusion of R&B, funk, rock, acid jazz and hip hop, The Pendulum Vibe was the result of a three-week marathon recording session between Joi and producer Dallas Austin, who co-wrote, produced and provided most of the instrumentation. The album’s sound was a slight departure for Austin, who up until that point had crafted a name for himself with a decidedly hip hop-influenced sound through his work with TLC, Another Bad Creation and Boyz II Men. He took a much different approach with Joi, however, instead delivering an organic and low-end definition sound.

To talk about The Pendulum Vibe is to speak to the impact it made at the time. Although the general public was slow to buy-in, the entertainment world was definitely tuned in. The album’s politically-charged openers, “Stand” and “Freedom,” provided a strong introduction to Joi’s fierceness. Though the intro and song were never released as singles, their message was heard loud and clear. The following year, the intro and song were combined and re-recorded as “Freedom” by an all-star cast of talent and featured as the theme song for the 1995 film Panther. Over 60 singers and rappers took part in the star-studded cover, including Aaliyah, Amel Larrieux, Mary J. Blige, En Vogue, Lalah Hathaway, Queen Latifah, Monica, Me’Shell Ndegeocello, SWV and more.

The remake made Joi a charting songwriter for the first time in her career. The soundtrack version made it to the top twenty of the Billboard Hot 100, the No. 10 spot on the R&B Singles chart and No. 45 on the Pop chart.

Further showing that she was ahead of her time, no topic was off limits for the former poet-turned-singer. “Narcissa Cutie Pie” found her waxing poetic about a sexual experience she shared with another woman, meanwhile “Find Me” and the album’s lead single “Sunshine & the Rain” took a more womanist approach with its lyrics. Beyond her themes of grrrl power and equality, Joi oozed a sexuality and confidence that shone through on the jazzy “Fatal Lovesick Journey.”

Her coy, innovative and bold approach to music even caught the attention of the equally daring singer Madonna, who was so taken with The Pendulum Vibe that she sought out Joi, befriending her. In fact, Madonna was such a fan of the album’s eclectic sound that also enlisted the production talents of Austin to produce material for her own 1994 album, Bedtime Stories.

With a cosign from one of contemporary music’s biggest pop stars, Joi’s career seemed poised to reach superstar status. However, her follow-up album, Amoeba Cleansing Syndrome was shelved after her record label folded. While mainstream success would remain out of reach for her, Joi has since developed a cult-like following thanks to her fearless approach to storytelling. She served a short stint as part of Lucy Pearl and would go on to record three more studio albums, in addition to becoming a frequent collaborator with the Dungeon Family.

None of this would have been possible if she had not captured music lovers’ attention twenty years ago with The Pendulum Vibe. To commemorate the occasion, she recently headlined a “20 Years of Joi” concert in Atlanta where she zipped through her extensive catalog of music before a packed room. Proving that she’s nowhere close to slowing down or mellowing out, Joi Gilliam’s sure to be around another 20 years more.