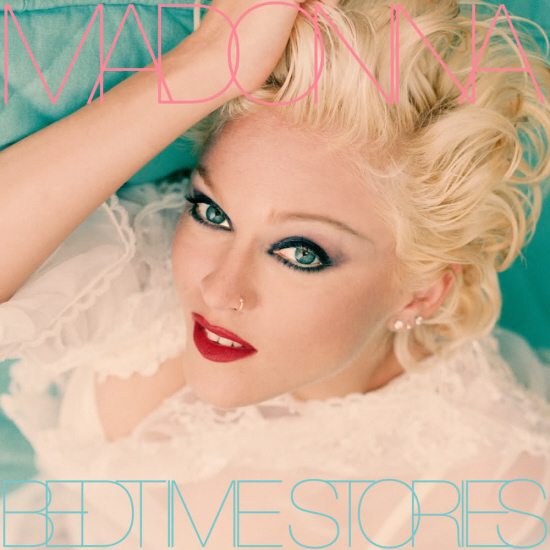 Madonna’s Bedtime Stories opens with the lines: “I'll never be an angel / I'll never be a saint, it's true / I'm too busy surviving.” In context, she wasn't talking about wandering the wilderness, chopping down brush to build shelter or detailing how she scarfed down toasted squirrels for fuel. Madonna was dealing with something much worse than Mother Nature and its combative elements: her critics. The boos and hisses where loud and vicious after her sex-ploration opus Erotica fell with a resounding thud, marking it as her first major music failure in a near-decade stretch of successes.

In its genre-bending set of tracks, Erotica played like a woman who was truly trying to explore the shadowed corners of human sexuality in an expansive musical narrative with slices of social commentary on the side. Yet, too many clutched their pearls for it as they weren't ready for a woman, who was already notorious for pushing the envelope, to discuss with even more bluntness about the consenting yearnings of society’s most taboo topic. Erotica was risk-taking, but now Madonna had pushed the envelope a little too far, exhausting everybody with her antics and gall, and by 1993, after an attempt to use sex as a weapon, Madonna was now shooting blanks.

Shaken by the backlash, Madonna sought to do damage control, this time realizing that her provocative image had indeed eclipsed her music. Now, at 36, she needed a new game plan, to pull back a bit on her confrontational zeal, and reflect. Enter Bedtime Stories, a balmy soul search that aimed to issue apologies and drown out the critical whips, easing Madonna back into the public’s good graces and testing her survival methods.

Preperations were made early on to polish Madonna’s crooked halo. After a disastrous box office sale with the erotic thriller, Body of Evidence, Madonna donned cleats and hammed it up with Tom Hanks in Penny Marshall’s 1992 baseball classic, A League of Their Own, even contributing the maudlin ballad "This Used To Be My Playground" to its soundtrack. With the single’s success, Madonna thought wise to go the soundtrack route again, and several months prior to Bedtime Stories release, she leaned into adult contemporary balladry with the elegant "I’ll Remember" for the flick With Honors. If that wasn’t enough of a pillowing, Warner Brothers then issued a promotional video for Bedtime Stories where Madonna (along with long-time producer Patrick Leonard’s young daughter in her lap) powdered on a Mother Goose sweetness, promising that her new album wasn't going to harbor any sexual references and that the music on it was "going back to basics." She batted her eyelashes and said all this while also swearing that she was going to be a “good girl” this time.

She was sorry and then not sorry, as a sly grin emerged by the video's end, noting that Madonna was still very much Madonna.

She retained that slick grin for Bedtime Stories' fourth and final single "Human Nature," where she raised a middle finger ("I’m not your bitch don’t hang your shit on me") and mocked her Erotica era objectors with witty sarcasm ("Oops I didn't know I couldn't talk about sex") and snarls back with tough truths ("Would it be better if I were a man?"), even poking a little fun at her past flop with the bondage kinkiness of the track’s Jean Baptise-Mondino-directed music video.

She threw the shade right, as she mentioned in an LA Times interview that nobody was questioning about Prince's sex life (albeit all you had to do was listen to any one of his albums to get that answer), nor any other male artist for that matter, and it shined a stark light on the weird imbalance between men and women -- where women have to worry about what is too much to show and tell, while men can never show and tell enough. With Erotica, Madonna showed and told too much, and Bedtime Stories purpose was to put the fabric softener on the perverseness, limiting how sensuality and sexuality crossed paths. While “Human Nature” was the outlier tongue wag, the remainder of Bedtime Stories presented itself as thus with Madonna firmly holding the pen and writing with more cerebral intricacy and intimacy than ever before. Her heart was peeled open for 1989’s Like A Prayer after her divorce from actor Sean Penn, but Bedtime Stories is a full undressing, showing Madonna with her make-up off, slipping into a sheer gauze of intimate apparel, her winding down after a long journey away from her celebrity persona.

We became privy to how she longed for romantic connection as the battered and orchestral swathed "Love Tried To Welcome Me" had her confess about being covered in "dust and sin," while the spooky "Sanctuary" quoted Walt Whitman and disturbingly associated death with desire in a Gothic twist that was filled with lust, paranoia and mystery. The mid-tempo bounce of "Inside of Me" managed to breathe homages to past lovers and Madonna’s deceased mother in a faultless tenderness, while some of her assertive bravado bubbled back on the guff "I’d Rather Be Your Lover" with MeShell Ndegeocello infusing her bass licks and a swaggering rap into the mix, egging Madonna to keep on love’s train no matter its current derailment.

The tears truly fall on "Take A Bow," a stunning Babyface-produced number that evoked theatrical imagery as it ached with awareness as Madonna comes to grips with being taken for granted in an relationship and her letting the curtain fall upon it. The gorgeously shot Michael Haussman-directed visual put her words into even more painstaking perspective as she became involved in a tragic love affair with a matador. Madonna has often been effective with ballads, and "Take A Bow" hinted at how she'd slip into the role of a serious chanteuse for the remainder of the 1990s, with 1995’s ballad retrospective, Something To Remember, and her Golden Globe-winning role as Argentine political figure Eva Perón in the film adaptation of Andrew Lloyd Webber’s Evita waiting in the wings.

Often relying on the intimacy of one or two producers, for Bedtime Stories Madonna opened her circle of collaborators, as along with Babyface and Ndegeocello, producers and artists Dallas Austin, Dave Hall, Nelle Hooper and Björk made appearances. Aesthetically, their presences allow Bedtime Stories to roll in a down comforter of contemporary R&B, hip hop and deep electronica, with shades of New Jack Swing and the early vibes of neo-soul enfolded in. Quietly too, the usage of sampling streamlines the entire set, and a real good ear can hear the familiar sounds of Herbie Hancock, Stevie Wonder, Main Source and even a young Baby Girl Aaliyah interwoven in the album’s fiber. For that, Bedtime Stories found Madonna at her most "urban."

Madonna has never been shy about indulging into Black music culture, and in turn she was often criticized for appropriating it. Yet, usually those who appropriate urban culture do it as a way to rebel out of their once wholesome image, but Madonna was doing the opposite, as a means to tone down a wild image, and as usual she came off appreciative for the soul sound and its cultivators, not once being tone-deaf and mocking (though in another decade or so she'd detour). Her admiration for the rise of R&B in the 1990s plays into her production roster, more so with Dallas Austin as after Madonna heard his talents on Joi’s groundbreaking, The Pendulum Vibe, and the framework he laid for TLC on their upcoming CrazySexyCool, she was itching to work with him, and he in turn gifted her with Bedtime Stories’ smoky first single “Secret” where Madonna found just the right balance of being smoldering and provocative without the hint of crassness.

Her most adventurous sound shift occurred when she paired with former Soul II Soul and Massive Attack collaborator, Nelle Hooper on the album’s peculiarly stimulating title track. With Björk’s assistance and words, "Bedtime Story" affirmed Madonna’s sexual agency with the same erotic bite as always, but with a softer rumbling as in the throes of a throbbing electronic meditation, she urged us all to "get unconscious." A super ambitious cut, with an equally jaw-dropping video that took us into a surrealistic enchanted land of one of Madonna’s most beautiful nightmares, it premeditated the course of Madonna’s creativity in later years.

For all of its hip production qualities and urbane candor, Bedtime Stories is often sorely forgotten in the vast cannon of Madonna’s career as it had the terrible fate of being wedged in between the wild Erotica and acclaimed spiritual ambiance of 1998’s Ray of Light. Even I myself missed out on it when collecting Madonna's back catalog in the early 2000's, but on the strength of "Secret" and "Take A Bow" (which is still one of my all-time favorite Madonna tracks), I dove in and realized how, in all of its quiet, how ambitious the album truly is and it has been a favorite ever since. I was a bit dismayed to learn that there was such as conflicting reputation circling around,  as to some the project screamed desperation and seemed like an act, while others viewed it as a calculated career move that pushed Madonna forward in artistic merit. It did do favorably well on the charts, peaking at No. 3, with singles “Secret” and “Take A Bow” hitting the top ten, the latter being her eleventh No. 1 single and the longest running single in her catalog as it stayed atop the charts for seven weeks. Still with those milestones, Bedtime Stories is weirdly misbegotten, possibly because some detractors and listeners were confused and tried to grasp the sexual nature that Madonna coded into each lyrical bar, and failed to do so as Madonna wasn't doing sex for shock sake this time, as it now was coming from a gentle, honest place.

Bedtime Stories did calm the critical storm for awhile and gave Madonna a maturing edge that found her growing up gracefully with her fans and with music listeners. She wasn't the squeaky "Minnie Mouse of Pop" anymore. Far from it, as she issued what is a fantastic apology letter, where she expressed herself and didn't repress herself, and came out surviving. Like a lady always does.