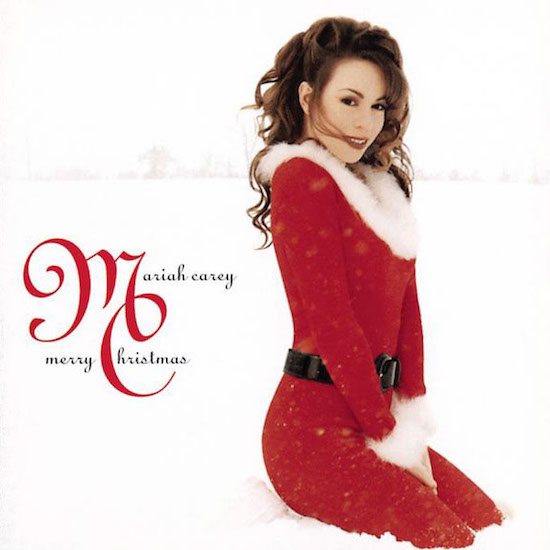 During Mariah Carey’s mid-’90s hot streak, the diva took a chilly turn when she released her fourth studio album, the winter holiday-themed Merry Christmas. It was a safe move, given Carey’s good-girl image at the time as she played wifey to music executive Tommy Mottola. But upon the album’s announcement, it also seemed like a quick and cheap way to cash in on the success of 1993’s Music Box, and to fill the gap until Mariah’s next “real album” rather than a genuine appreciation for holiday tunes.

But that assumption couldn’t have been further from the truth. As promotion for Merry Christmas began and the tunes hit radio and video outlets, naysayers would be proven wrong as Carey debuted one of Christmas music’s greatest songs ever and racked up one of the best-selling holiday albums of all-time.

Teaming with Walter Afanasieff, her songwriting partner on Music Box and 1991’s Emotions, Carey penned three new songs for Merry Christmas. One of them, the now inescapable “All I Want for Christmas is You” ­— a favorite everywhere from school recitals to superstar-featuring tree-lighting ceremonies — became an instant classic. Sure, its layered, vocal-heavy verses and chorus almost force carol-like sing-alongs, but the melody of the tune is strung with jingling bells, playful piano keys and chiming Christmas magic. Though evident are its pop sensitivities, the song possesses a tinge of gospel flavor, the likes of which crept into tunes on Music Box and would add a peppermint twist to other tracks found on Merry Christmas.

Nowhere was that more true than Mariah’s take on “Jesus, Oh What a Wonderful Child,” an already upbeat interpretation that went into double time as she traded notes with a backing choir and offered up then rarely heard vocal play.

Yes, by taking us to church, Mariah was putting the “Christ” back in “Christmas.” But her sometimes-slammed rendition of “Joy to the World” did that and more, as she and the choir harmonized a cappella style before the music built up and then dropped a house beat, sounding as much like an invitation to a dance club as to rock around the Christmas tree.

But with such big voices, Mariah and company were still able to cradle the fragile “Silent Night” and “Hark! The Herald Angels Sing/Gloria (In Excelsis Deo)” without breaking eardrums. The tender new track “Miss You Most (at Christmas Time)” — the chronological predecessor to “All I Want for Christmas is You,” despite its placement on the tracklist — was one of the sadder songs on the set, as Mariah crooned lyrics of longing for her lover during the holiday season.

“Christmas (Baby Please Come Home)” validated the “all I want is you/I miss you” theme, with Carey’s version sticking close to Darlene Love’s rocking rendition. “O Holy Night” is also another tune that doesn’t stray far from the version we’ve become accustomed to, as is “Santa Claus is Coming to Town,” though the latter got a bit of a rearrange that still captured the intended message’s enthusiasm. Meanwhile, “Jesus Born on This Day,” the third new song for the set, took on a somber and spiritual tone.

Merry Christmas left no doubt that Mariah loved the season, but much like the post-“End of the Road” Boyz II Men album, Christmas Interpretations, Merry Christmas felt organic and less like filler material, and it breathed new life into otherwise stale standards. Taken as a total package, it offered nearly 40 minutes of Christmas music that still caters to tastes young and old, black and white and brown, spiritual and secular. And for those of us coming of age in the mid-’90s, its greatest legacy may be “All I Want for Christmas is You,” the holiday song from “our” generation that still signals the season.