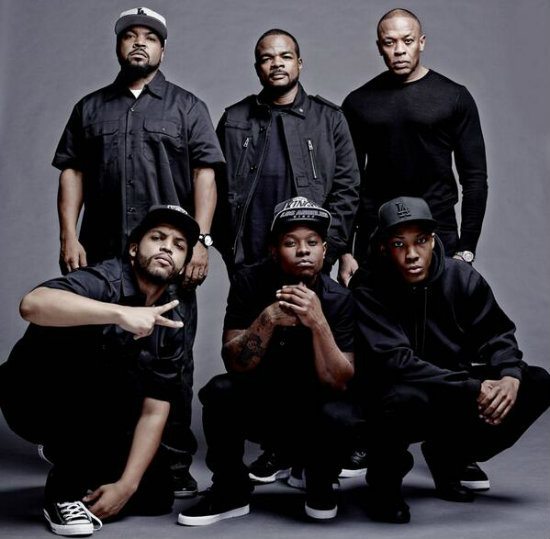 Buzz surrounding the upcoming N.W.A. biopic Straight Outta Compton has been building ever since it was first announced that the movie was in the works. The buzz really reached a fever pitch last year when the above image was released showing the actors who would be playing the group's founding members Ice Cube, Eazy E and Dr. Dre., which included Ice Cube's own son, O'Shea Jackson Jr., portraying his father. Though the film isn't set for release until August 14, 2015, Ice Cube recently whipped a crowd of Australian concertgoers into a near frenzy when he unveiled the movie's trailer for the first time during a recent concert in Sydney.

Thanks to a few concertgoers uploading the footage to YouTube, the rest of the world can now get a sneak peek at what's in store. And if the audience's cheers and shouts that are heard in the background are any indication, the biopic is sure to be a crowd pleaser. In the fast-paced clip, we get our first glimpse at the movie, including a high-speed car chase and a scene featuring Dr. Dre, portrayed by Corey Hawkins, during a prison stint. We also get to see actor Paul Giamatti in his role as N.W.A.'s manager and co-founder of Ruthless Records, Jerry Heller.

Though the trailer is pretty short, it's evident that the F. Gary Gray-directed film will be light years ahead of the recent spate of Lifetime biopics that have been released about celebs such as Aaliyah and the upcoming Whitney Houston one. And with members of the actual group having a hand in it, Straight Outta Compton already carries more credibility than the aforementioned biopics that have been publicly contested by the families of the artists featured, to the point that they couldn't even obtain approval to use the original music in them. So while August feels light years away for now, check out the clip to see if you'll be lining up at theaters to support this slice of hip hop history.