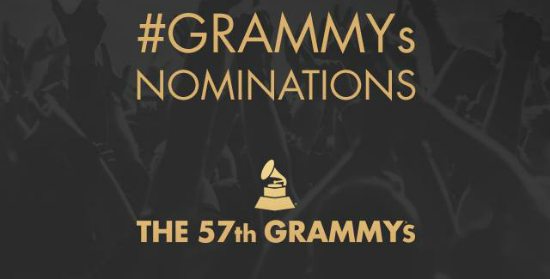 Well friends, the 57th GRAMMYs nominations are being announced today, and they are, for lack of a better term, interesting. Yes, some of our favorites garnered noms, and rightfully so, but some of the Recording Academy's other choices have us scratching our heads and wondering if they heard the same music that we did this past year. Because we at SoulBounce like to bring you the best in R&B and Soul, lets start there and work our way around. Shall we?

First up is the Best R&B Performance category, which the Academy actually got right...mostly. Our girl Ledisi lands a nom for "Like This" alongside Jennifer Hudson and R. Kelly for "It's Your World," Beyoncé and Jay Z for "Drunk in Love" (who didn't see that one coming?)" and Usher for "Good Kisser." But, because one of these things just can't be like the others, the Academy also inexplicably nominated Chris Brown for his single "New Flame," which also features Usher and newly-svelte Rick Ross, and, if we're allowed to be honest, is about as run of the mill as you can get as far as R&B is concerned.

The Best Traditional R&B Performance field is a bit better, with Robert Glasper Experiment's Lalah Hathaway and Malcolm Jamal-Warner-featuring "Jesus Children," Angie Fisher's "I.R.S." and Kem's "Nobody" getting nods. But they also will compete against Marsha Ambrosius and Anthony Hamilton's funeral dirge take on Stevie Wonder's "As" (for this writer's feelings on that one, see this post) and Antonique Smith's "Hold Up Wait A Minute (Woo Woo)." While we here are fans of Ms. Smith, and especially her tremendous voice, we're sure we're not the only ones who thought that her nom was a surprising inclusion.

Other than another inexplicable nod for "New Flame," the Best R&B Song category is pretty much what you'd expect, with "Drunk In Love," "Good Kisser," Luke James' "WolfJames Version" of "Options" and Jhené Aiko's "The Worst" landing noms. But the Best Urban Contemporary Album category is, for lack of a better term, a bit random. The category, created to award R&B albums that broke the traditional R&B mold (in other words, albums that walk that fine line between R&B and hip hop), the Academy really doesn't know what to do with it, and this year proves no different. How else do you explain Beyoncé's gritty self-titled project, Chris Brown's hip hop-leaning X and Pharrell's genre-bending G I R L battling it out with the subdued, hippie soul of Jhené Aiko's Souled Out and almost straight up gospel of Mali Music's Mali Is...? While we can understand what the Academy's trying to do, we wish that this category was a bit more clearly defined.

Luckily, the Best R&B Album category is less controversial. Toni Braxton & Babyface's Love, Marriage & Divorce, Robert Glasper Experiment's Black Radio 2 and Sharon Jones & the Dap-Kings' Give The People What They Want going toe to toe. The only head-scratcher here is Bernhoft's Islander. Bernhoft, who has been featured on SB more than a few times, differs greatly style-wise from those included here and, while definitely GRAMMY-worthy, doesn't really seem to fit in this category.

Of course, SB faves don't just make appearances in the R&B category, as soul is universal. Or boy Sam Smith, who is up for the coveted Best New Artist Award, is set to duke it out with Ariana Grande and others for Best Pop Vocal Album and is also recognized for his pen game in the Song of the Year category. Speaking of pop, Sam will also compete against John Legend for his live version of "All Of Me" and Pharrell for his live version of "Happy." Elsewhere, our boys Disclosure, along with Mary J. Blige, got a nod for Best Dance Recording for "F For You" and our Swedish faves Little Dragon are in the running for Best Dance/Electronic Album for their magical Nabuma Rubberband.

To see all of the 57th GRAMMYs nominees, check out the full list on the GRAMMYs website. The nominees for the event's ultimate award — Album of the Year — will be announced during tonight's telecast of A Very GRAMMY Christmas on CBS.