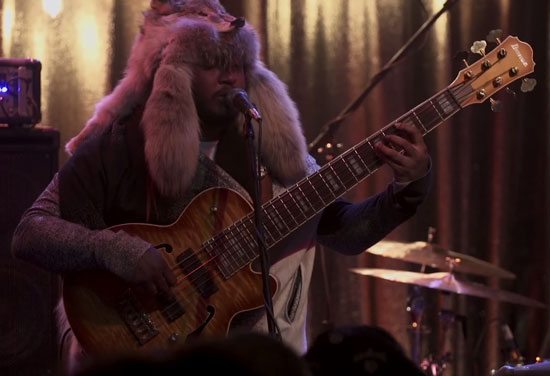 Thundercat continues to brandish his brand of funk and soul out here for the world to see and Pitchfork had the good sense to feature him live. Wearing a furry friend, Thundercat recently performed a new, unreleased track entitled "Them Changes" at One Eyed Jacks in New Orleans for Pitchfork's new Nightcap series. Sponsored by Jim Beam Bourbon, Nightcap is a series of late-night concerts in various cities (and by late, they mean midnight). In an interview with Pitchfork before the show, Thundercat proclaims performances should start late and that's the time he likes to play. Clear evidence of this is in the video. While he didn't know what to expect from his own performance, what we got was a jazz and funk fusion with expert instrumentation. Backed by his band, Thundercat plucked the bass and took us into another world.

The quartet presented a cohesive force that kept the crowd moving. With his eyes closed during the majority of the set, you can clearly see Thundercat was feeling the music as he jammed with his band and delivered an inescapable funk-filled performance. We're not sure when he'll release "Them Changes," but if you need a Thundercat fix, you can still listen to him on collaborator Flying Lotus' recently released album You’re Dead!, which is now available on iTunes.