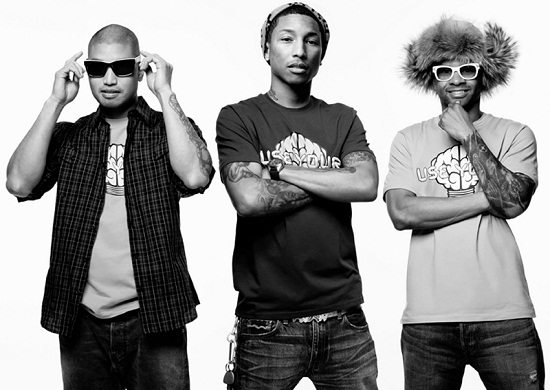 After a four-year hiatus that found Pharrell going solo, Chad taking on other production duties and Shay doing whatever the hell Shay does when he's not performing with the group, N.E.R.D. returns with a brand new single "Squeeze Me." But before you get all excited, we should point out that this new track is lifted from the upcoming movie The SpongeBob Movie: Sponge Out Of Water. That's right folks, it's for a new SpongeBob Squarepants movie, which means that, like the cartoon, it's very fun and kind of nonsensical (though that kinda describes a lot of N.E.R.D.'s catalog).

For their trip to Bikini Bottom, Skateboard P and crew try on a bouncy, silly groove that's sure to get those hyperactive brats in you life moving and grooving as they watch their favorite yellow sponge. However, it's not all child's play here. With a slightly suggestive chorus ("Squeeze me 'til I pop / Squeeze me 'til you drop") it's not certain whether everything here is squeaky clean fun. Sure, it's not the return that we were hoping for from the collective, but it's still a fun enough jam considering what it's for. And, lest we forget, Pharrell's last mega-hit started off as a song from the Despicable Me 2 soundtrack.

Though "Squeeze Me" won't be available for purchase until January 5th, you can give it a spin right here.


TAGS:  audio, chad hugo, n.e.r.d., pharrell williams, shay haley
Previous: Pitbull & Ne-Yo Show Us How To Have The ‘Time Of Our Lives’ Next: Donnie & Daz-I-Kue Fight The Powers That Be With ‘Protester’