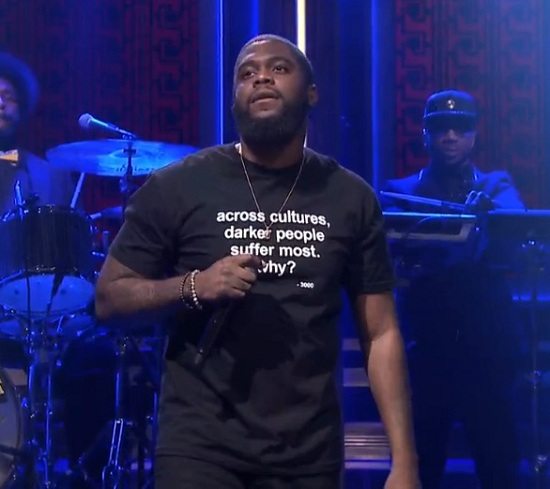 Mississippi-bred rapper Big K.R.I.T. had a pretty good 2014. His most recent album, Cadillactica, was named to a slew of "Best Of" lists last year and it peaked at No. 5 on the Billboard charts. Basically, he smashed the hell out of the sophomore jinx. With the album having just arrived in November, it's almost guaranteed that 2015 will be just as bright.

To kick the year off, he brought along Raphael Saadiq  to The Tonight Show Starring Jimmy Fallon to perform their collaborative track "Soul Food." The Southern-fried number, backed by house band The Roots, went over pretty well, with the musicians all vibing out to the track as K.R.I.T. spit rhymes something furious and rocked a black T-shirt with one of Andre 3000's poignant jumpsuit quotes. It all went out without a hitch (not that we expect anything less) and how the audience both at home and in studio rocking.

In case you couldn't make it to the late night hour, we've included the performance below for your viewing pleasure. Check out K.R.I.T. and Raphael, with a little help from The Roots, do the damn thing on the Tonight Show stage below.