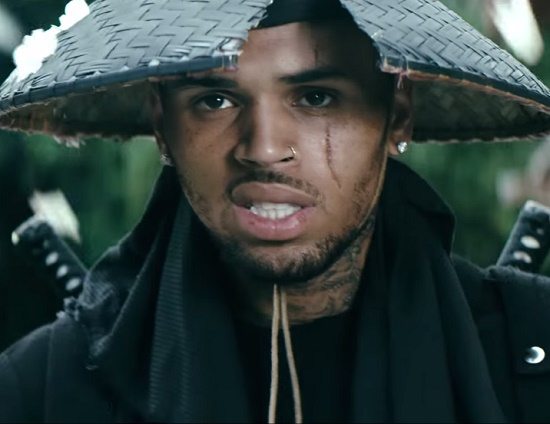 Chris Brown loves himself some Asian culture, it seems. The R&B singer initially showed his love for the Far East when he released the video for his single "Fine China" back in 2013 (though the song made reference to the dinnerware and not the country). He's back at it again for his newest video, "Autumn Leaves."

In the clip, Chris moves from China to Japan (though the video was actually filmed in Hawaii) as he casts himself as a lovelorn samurai chasing after the woman of his dreams (played by real life on-again-off-again lover Karrueche Tran). While there is no real story attributed here, like why he's following her or how he came to find himself in this place, the clip is rather beautiful. It's filled with lovely imagery like crystal blue water and sandy beaches, flower petals fluttering in the wind and actors doing fight choreography amongst the scenic visuals.

That the clip looks amazing is fortunate because the song itself is rather unremarkable, with a dragging groove and phoned in vocal from Chris and guest rapper Kendrick Lamar (who doesn't make an appearance in the clip). Honestly, it's a surprise that they picked this as a single. But maybe, like many lackluster tracks of the past, the video will bolster the song's appeal. Check it out below.