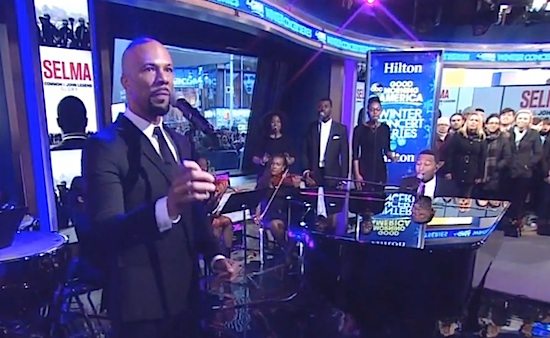 Our daytime and late night television options to see artists whom we love perform might be few and far between nowadays, but morning TV is picking up the slack. Bright and early this morning, the Good Morning America Winter Concert Series featured two SoulBounce faves on one stage with John Legend and Common uniting to perform their song "Glory," taken from the feature film Selma.

Seated at a grand piano, Legend began playing and singing with the force of a hundred Negro spirituals before his background singers chimed in like a heavenly choir of three.  Then the four-woman string section picked up their instruments and added an orchestral element to the performance right before Common stepped to the mic. Dressed in a matching black suit ensemble, the rapper spit his lyrics juxtaposing the struggles of the Civil Rights Movement with today's racial discord and social ills. It was a powerful performance that drove the salient message of the song home.