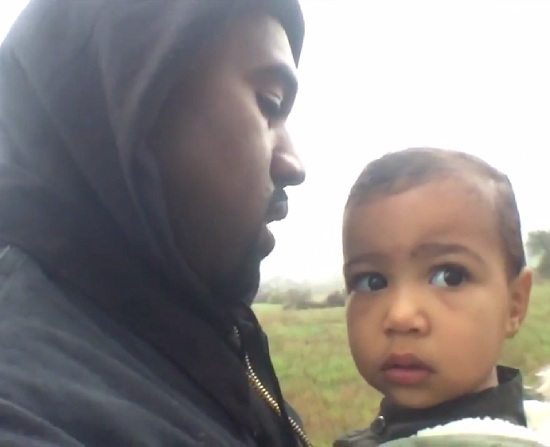 If you were to take a look at Kanye West's paparazzi shots, then it'd be safe to assume that he's far from being a happy man. In most of the pictures, he looks sullen, petulant and downright angry at times. However, he paints a totally different picture in his latest video, "Only One." Despite the gloomy, overcast backdrop in the video, Yeezy is the epitome of total joy and satisfaction in this dedication to his daughter, North West. Though simple in nature, the video, which he unveiled during an appearance on The Ellen DeGeneres Show, captures the love shared between father and daughter. As he runs towards Nori in the video's opening moments, a large smile covers his face as he draws closer, bending down to take her into his arms. The cocky, loud-mouthed Kanye that has been on display in recent years is replaced by a doting father who gently takes his daughter's hand and guides her through their walk.

Directed by Spike Jonze, "Only One" provides a sparse and uncomplicated view that keeps the focus on the song's heartfelt lyrics and the meaning behind them. As previously mentioned, Kanye penned the song as a dedication to his daughter through the voice of his late mother, Donda West. For an artist that frequently subscribes to the "bigger is better" philosophy, seeing Kanye in such a stripped down and emotionally raw setting is a refreshing change of pace that we welcome with open arms.


TAGS:  Donda West, kanye west, North West, spike jonze
Previous: Deborah Cox Returns To The Dance Floor With ‘Kinda Miss You’ Next: Morning Soul: Sex So Good I Can Freak You In My Sleep