N.E.R.D. Gets Animated For ‘Squeeze Me’ And Unveil New Songs 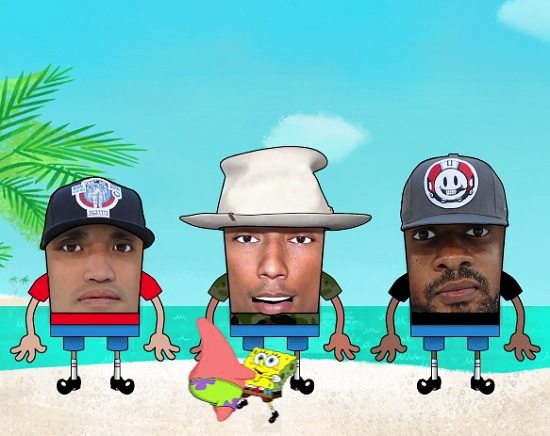 While some of us might consider ourselves a little too old for SpongeBob Squarepants, it's hard to deny the fun that is N.E.R.D.'s "Squeeze Me," one of their contributions to The SpongeBob Movie: Sponge Out of Water soundtrack. The trio capitalize on the fun in the best way possible in the bouncy animated video for the song. The trio become their own versions of the rectangular character for the clip, which finds them floating through scenes from the film with the characters as they (slightly creepily) mouth the words to the song.

While "Squeeze Me" is the lead single, the crew also contribute two other tracks to the compilation, "Patrick Star" and "Sandy Squirrel," named after SpongeBob characters. "Patrick Star" has a classic Neptunes sound, full of the buzzy synth and guitar that made Pharrell and Chad Hugo household names in the late '90s and early '00s. "Sandy Squirrel" takes a slightly different approach, with a stuttering groove accented with dreamy piano chords that twinkle and even gives group member Shay Hayley a small bit of shine with a raspy rap.

All three songs are super-goofy, nonsensical fun that are sure to find audiences both old and young alike. Check out the video for "Squeeze Me" below and listen to "Patrick Star" and "Sandy Squirrel" below.