Sam Smith Brings ‘Lay Me Down’ To ‘Ellen’ 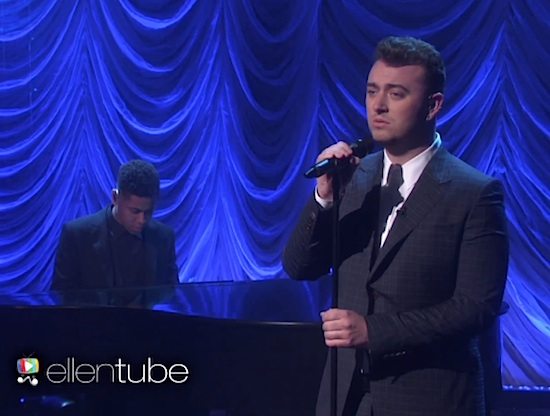 Ellen DeGeneres sure does know how to celebrate her birthday. In honor of turning the big 5-7, Ellen has devoted a whole week's worth of episodes of her daily talk show to having a jolly old time as she rings in a new year of life. Of course, all of her famous friends are stopping by this week to help her, and yesterday she not only welcomed Kanye West to premiere his "Only One" video but Sam Smith also dropped by for a return engagement.

Smith was just on The Ellen DeGeneres Show last month after he won Best Male Artist at the American Music Awards. Now, as he is favored to take home multiple GRAMMY Awards at the 57th GRAMMYs next weekend, Sam came back to perform his single "Lay Me Down" and clocked in yet another pitch perfect performance. Initially accompanied by only a piano, the searing ballad about yearning for a lost love was taken to higher heights by an eight-piece string section. It was Smith's voice that was the true star of the story, however, with a flawless execution. Watch Sam Smith in action on Ellen and look out for him to perform on the 57th GRAMMYs on Sunday, February 8th and possibly walk away with a GRAMMY or six.