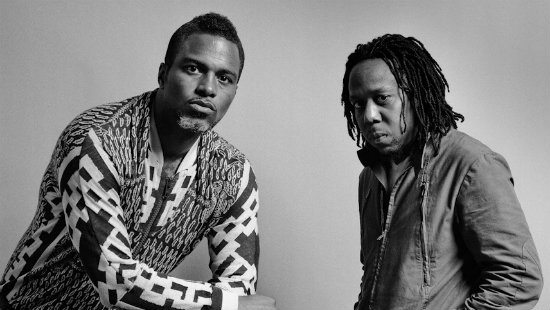 Shabazz Palaces is back with a new track to whet your appetite. The question is will you want this dish that this Seattle duo is serving? If you are like many and were sickened by the police brutality that has taken the lives of the Mike Browns, Eric Garners and the John Crawfords of the world, then there's a solid chance that this "Ham Sandwich" will leave a bitter taste in your mouth.

Palaceer Lazaro aka Ishmael Butler and Tendai "Baba" Maraire deliver a timely, politically charged anthem that captures the frustration and distrust of law enforcement that has ensnared the country recently. Backed by a driving, urgent beat, Butler spits a fiery indictment at the corrupt police officers or "pigs" that are terrorizing the black community. Clocking in at only two minutes long, they still pack in a jarring punch, with Palaceer saying, "These pigs are devils, black / They'll smoke you in this place." The song comes mere months after the release of the group's 2014 album, Lese Majesty, inspired by the seemingly increasing police violence that has pervaded in recent months.