Angie Fisher Sings Away Her Worries In The ‘I.R.S.’ Video 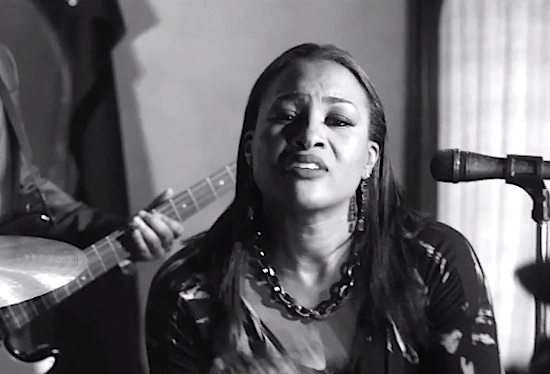 Tax season is upon us, but Angie Fisher shouldn't have any problems paying her taxes with the success of her song "I.R.S." She may not have brought home the GRAMMY for Best Traditional R&B Performance at the 57th annual awards show, but she did bring the house down during the Premiere Ceremony before the televised portion of the GRAMMYs. Beyoncé, I'ma not let you finish, because Angie's performance was hands down the best of the day, and she didn't need the Illuminati Jubilee Singers & Male Revue to back her up either. But I digress.

After that stellar showing over the weekend, Angie has followed it up this week with the music video for "I.R.S." and she continues to enthrall. Directed by Stephen Laurence Harvey, the black-and-white feature finds Fisher alternating between singing solo while strutting around the outside of a warehouse rocking big sunglasses and a fur coat or performing as the saucy frontwoman of a band that looks straight out of a back-in-the-day juke joint. She's not just singing with any old band, but she has the original singer and songwriter of "I.R.S." B. Slade in the mix. All eyes and ears are on Fisher, though, with her commanding presence and THAT VOICE drawing you in. She may be singing about the "I.R.S." taking all her monies, but she looks rather unbothered as she fans herself like a true diva. Even with the "I.R.S." on her case, she won't let them see her sweat.


TAGS:  Angie Fisher, b. slade, beyoncé, Stephen Laurence Harvey
Previous: Morning Soul: I Thank You For Making Me A Woman Next: Tuxedo Wants To Help You ‘Step In The Name Of Love’ For Valentine’s Day