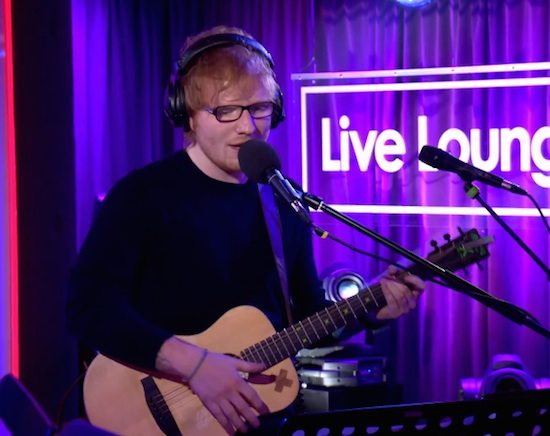 Now this was unexpected.

Beyoncé's recent duet partner, Ed Sheeran, proved once again that he can hang with the divas. The evidence came in the form of a BBC Radio 1 Live Lounge performance, in which the singer-songwriter offered up his take on Christina Aguilera's "Dirrty."

The coming-of-age, "good girl gone bad" club banger is a bold choice by any standards, but Ed seemed up to the challenge, even if the Englishman's rendition — parts of which periodically showcase heavy doses of his accent — deviates from the hip-pop sound to his fit into his guitar-strumming sensibilities. Not that it matters much, as the stripped-down, acoustic version is delivered verbatim by Sheeran, with him inserting the original's street-worthy sound by reciting the rap from Brick City's own Redman.

It's a clever interpretation of one of Christina's signatures and provides a newfound appreciation for a pre-Miley Cyrus cut from a Disney girl becoming an adult. It also makes us appreciate Ed's musicianship that much more, since his dusting off of an aughts classic gives it a crisp and fresh feel.