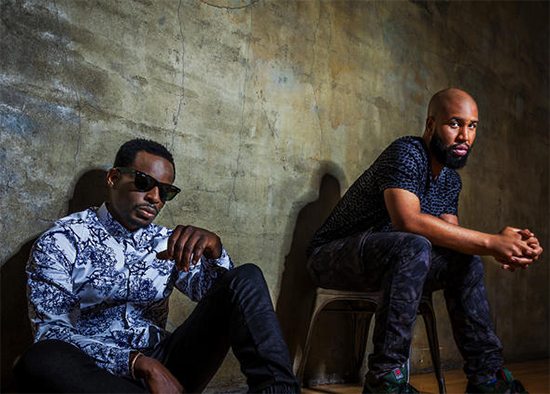 Claude Kelly and Chuck Harmony have spent years reigning over the music industry as the kings behind the scenes. Their resumes collectively and individually span from writing and producing for everyone from Whitney Houston, Kim Burrell, Ledisi, Toni Braxton, Faith Evans and Janet Jackson to Kelly Clarkson, Bruno Mars, Britney Spears and Christina Aguilera. You would think that those royalty checks alone would leave these guys content and comfortable for life. But they have both decided that it’s time to step up and get the shine that they rightfully deserve. Claude and Chuck are now joining forces on a grander scale and re-emerging as the new duo Louis York.

The very first release from Louis York is the song “Clair Huxtable,” which premiered on the Los Angeles Times' Pop & Hiss column.  "Clair Huxtable" is beautifully wrapped up in R&B sounds and classy black pop culture references. With a track record like these two have, it’s a dead giveaway that their material would be top notch and that it is indeed. This delightful record, produced by Harmony, starts off slow, sweet and acoustic as Kelly croons about what the woman of his dreams will look and act like. He wants her to read books on philosophy, dine at small local eateries and have the best shape along with a beautiful mind. He’s basically looking for a girl straight out of a Tumblr post. The song eventually transitions into a smooth bop as Kelly continues to describe the template for the perfect lady, a modern day Clair Huxtable from The Cosby Show. By the way, their timing is impeccable as Mrs. Clair Huxtable herself, Phylicia Rashad was honored last night on this year’s BET Honors broadcast.

Besides their great musicianship and clever lyricism, this song just feels so good. If Louis York plans to bring more of this with their upcoming Masterpiece Theatre Act I EP, then we will certainly be tuned in and waiting with baited breath.