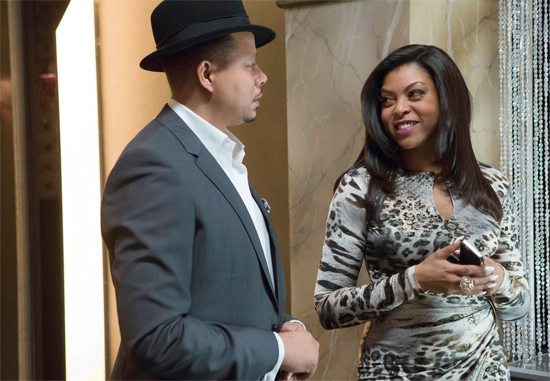 At the end of the sixth episode of Empire there was a gag-worthy cliffhanger with the revelation that Jamal might have a baby mama. We gasped, swooned and fainted at that unexpected plot twist and couldn't wait to tune in this week to see what happened next. Our favorite guilty pleasure didn't disappoint, and it even upped the ante.


Empire Entertainment is preparing for their big 2015 Investor Showcase, and Lucious is on edge trying to perfect every detail. Adding to his stress is Cookie who isn't feeling Jamal's ex Olivia -- who we find out is his ex-wife (!) not just an ex-girlfriend -- popping back into his life with a child in tow. Cookie gives Lucious the business trying to figure out why he forced Jamal to marry his backup singer when he was 18, but before Lucious can answer he falls out onto the floor and has a medical emergency that sends him to the hospital.

Back in fake-Bushwick, Michael isn't feeling the love from Jamal and he decides to break things off and move out. Jamal tries to stop him, but in a tearful goodbye Michael realizes that he'll always come second to Jamal's first love: music. Welcome to Dating a Musician 101, kid.

Hakeem isn't having much better luck in the love department with his cougar bae Camilla (here again, played by Naomi Campbell in the most unbelievable TV pairing ever), who he's having a romantic private meal with prepared by celebrity chef, Chef Roblé. Camilla's icy cool turns to an arctic freeze after Hakeem gives her a diamond and gold chain -- of his name. Now, if she was 20 years younger that might fly, but Camilla isn't having it and feels some kinda way that he wants to brand her but refuses to go public with their romance. She declines the gift because she's not a "backstreet slut" and Hakeem tries to placate her by extending an invite to the Investor Showcase, which she accepts.

Lucious is on the mend in the hospital but is in denial when a new doctor explains to him that the experimental ALS treatment he received is doing more harm than good. His condition is somewhat stabilized, and he leaves the hospital to go home on bed rest and back to tele-working to plan the showcase.

Over at Leviticus, Hakeem and Jamal are rehearsing a new song and they look and sound a hot mess. Cookie tightens them up with a few words for them to literally get their act together, but their beef is still simmering. Hakeem is the least of Jamal's worries when his supposed daughter with Olivia turns up with her suitcase in an elevator at Empire's headquarters saying, "I lost my mommy," who is in fact nowhere to be found.

Cookie meanwhile is having a cow as she waits for Elle Dallas, who's scheduled to perform first during the showcase, to show up to rehearsal. Caucasian Elle is on CP Time -- her exact words -- but she shows up and shows out in her own special way. Courtney Love's voice as Elle Dallas is an acquired taste like kale, but she does a good job during rehearsal and Cookie is content.

It's almost time to get the Investor Showcase underway and Leviticus rolls out the red carpet, which Elle struts down like a star. She hooks back up with Cookie and they kick it over cups of tea. Cookie bounces and Anika sits down with Elle for some chit chat. When Elle is distracted by a fan, Anika's motives become clear as she pours a vial of some unknown substance into Elle's tea. Malcolm, the mysterious head of security sexily played by Derek Luke, witnesses this act but doesn't do anything. Yet, at least.

Camilla the cougar is in the house but keeps her distance from Hakeem so as not to blow their undercover lover status. While she's posted up at the bar looking every bit the supermodel that she is in real life, she catches Lucious' attention. He asks Becky, "Who's the Liberian girl," in one of the more hilarious lines of the episode. Lucious and Camilla exchange some flirtatious banter, but little does he know she likes her meat rare.

Poor Elle is in the ladie's room tripping off of whatever mickey Anika slipped in her drink. Cookie finds her and is enraged, of course assuming that Elle is back on that stuff after she worked hard to get her clean. It's a bad look for Elle and now Cookie has to break the news to Lucious that she can't perform first, if at all. Cue Jamal and Tweedle Dum, who are still fighting with each other but now have to step it up and into the starring spot on the showcase. They get over themselves and perform "Money For Nothing," a modern flip of the Dire Straits song from 1985.

Jamal and Hakeem are getting it in on stage, but backstage Lucious is suffering another ALS attack of some sort that this time affects his voice right when he needs to make his big speech to the investors in attendance. He insists that Cookie take his place, much to Anika's chagrin. Our girl does what she does best and speaks off the cuff and from the heart, charming the money right out of the investors' pockets. After her speech, Lucious is so taken aback by her words that he proclaims, "I love you, Cookie," while Anika tightens her jaw.

Little miss Boo Boo Kitty can't stick around after the showcase because she has a flight to Chicago to catch for a meeting. The rest of the family gathers at the Lyon compound for a post-showcase meeting where Lucious finally reveals to everyone that he has ALS, what it is, that there's no cure and it will be fatal. The brothers don't take this news too well. Hakeem and Andre nearly come to fisticuffs before Andre flicks off and leaves with Rhonda. They go back to their place where we see Andre sitting fully-clothed in the shower having a psychotic break.

Cookie is taking the news surprisingly well, but it could be the cognac she's sipping with Lucious that has her mellow. She does eventually break down in tears, telling Lucious that he needs to beat ALS because she can't lose him again. Lucious wipes her tears and they slow dance to an old song of his. They start reminiscing and before you know it they're kissing like newlyweds. They make their way from the living room to the bedroom and it's on like popcorn. His ALS is in remission tonight!

Lucious and Cookie are in the throes of passion when, unbeknownst to them, Anika comes home early from her trip to Chicago and finds the two once lovebirds making love in her bed. Woo chile! She is paralyzed at the doorway and watches them before she walks away in silence. She's clearly not 'bout that life.

With only four more episodes left in this season of Empire, it's anybody's guess what will pop off next. Will Lucious have his Cookie and Anika, too? What will Malcolm do with his knowledge of what Anika did to Elle? Will Andre realize that he did the ALS ice bucket challenge all wrong? Will Jamal finally get a paternity test to determine if Olivia should be renamed "Billie Jean"?

We'll be tuned in to Empire every Wednesday night for the next few weeks to find out. Be sure to come back next Thursday for SoulBounce's latest recap.