Faith Evans Was Anything But ‘Fragile’ On ‘The Queen Latifah Show’ 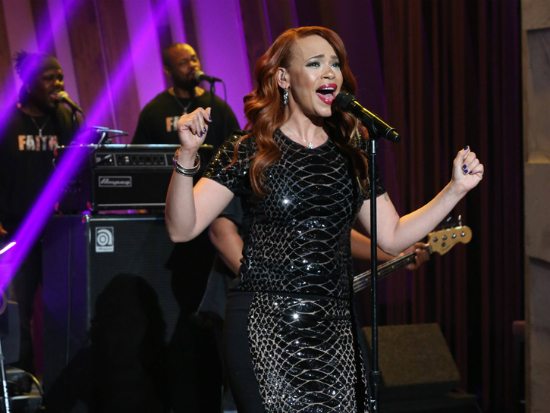 The Queen Latifah Show is nearing the end of its run, but the show isn't taking its unfortunate cancellation lying down. Queen Latifah is still bringing guests to her stage that we want to see and hear, and that was definitely the case today when Faith Evans graced it.

Queen introduced the R&B diva as the "Queen of R&B" and although some of her peers might take issue with that title, Faith definitely earned the crown. With her band backing her up in matching black t-shirts with FAITH emblazoned on the front, Evans brought the goods vocally with a live performance of the song "Fragile" from her 2014 release Incomparable. Faith and the fellas were grooving as they performed the catchy, two-step worthy song. Latifah was as impressed as her studio audience and those of us watching at home.

After she sang, Queen and Faith sat down for a little chit chat to talk their long-time friendship and past working relationship, the new album and what's in store for the singer. One gem that Faith dropped is her plan to do a collaborative album with her late husband The Notorious  B.I.G., entitled The King & I, in the vein of Natalie Cole and her posthumous recordings with her father Nat King Cole. Now that sounds like something that we'll definitely be checking for when it's released.

Get into Faith's stellar performance and informative interview right here, and be sure to add Incomparable to your collection, if it isn't there already, to get this jam and many more. Incomparable is available on Amazon, iTunes, Google Play or wherever albums are sold.


TAGS:  faith evans, queen latifah, the notorious b.i.g., The Queen Latifah Show
Previous: Kenny Lattimore Returns With ‘Love Me Back’ Next: Morning Soul: Let Me Serve You Up